For centuries architects have been inspired by nature's forms and geometries. Their designs have been influenced by her structures, proportions, colors, patterns, and textures. Architects have incorporated these influences in what has been primarily an empirical process.

It is only in the past decades that much of the underlying logic, mathematics and chemisty of nature's forms has been better understood. In the late 1960's, the biologist Aristid Lindenmayer proposed a string-rewriting algorithm that can model simplified plants and their growth processes with an astounding ease. This theory is now known as L-Systems.

This project examines whether this algorithm can open up possibilities in the field of architecture. Can L-Systems be applied to the production of architectural form? Could they serve additional functions such as the creation of an organizational logic, the segmentation of space, or the development of a structural system?

This project dates back to 2003. A link to the original Flash presentation is at the bottom of this page.

A Brief Introduction to L-Systems

A Lindenmayer System is a formal grammar that was initially conceived of as a theory of plant growth. L-Systems can model complex forms of plants using relatively few simple rules.

L-Systems consist of two parts: a generative and an interpretative process. The main concept of the generative process is string-rewriting, in which letters that comprise and initial string are replaced in parallel by new letters according to pre-defined rules. Together, these new letters form a new generation of string, which can then be subjected to the same replacement rules. This string rewriting process is usually repeated for several iterations.

In the second part of the L-System, the letters of the final generation of string are interpreted. This project explores the visual interpretation of string as geometric forms. It primarily uses the concept of turtle graphics, borrowed from the Logo programming language, to translate individual letters into drawing commands.

In the following example, the intial string a is rewritten three times to create abacabaabacabaacaba.

In the second part of the system, letters of the generated string are interpreted. This project mostly uses turtle graphics to turn the string into a geometric form.

The animated example uses these three commands, together with the following inputs, to create a from that resembles a Serpinski triangle:

The L-Systems algorithm described above can be expanded to facilitate the production of architectural geometries. In a first step, turtle graphics commands are ammended to control movement in 3D space. In such an environment, voluminous geometries can then be generated through extrusion along the turtle's path, or by using path segments to create surfaces (e.g. lofting).

Further geometric freedom is obtained by introducing variable parameters directly into the turtle graphics language. Finally, the system is expanded to incorporate environmental interaction, so that the turtle executes different strings depending on the local conditions it encounters.

In lieu of fixed replacement rules, one can introduce stochastic rules so that a letter is replaced by a fist string with a specific probability, and otherwise replaced by another string. Indeed, any number of replacement scenarios are conceivable. In the example below, the following rules are applied:

The resulting system produces an irregular branching structure caused by the random numbers in the replacement process. By allowing these random numbers to also fluctuate each time the system is run, many different permutations of a design can be produced.

In order to control the L-Systems drawing rules with a higher degree of precision, it is useful to introduce parameters into the string rewriting rules. On a most basic level, this can include specification of incremental changes for to the turtle's state. For example:

This syntax can be further expanded to include mathematical functions, conditionality, as well as independent variables: 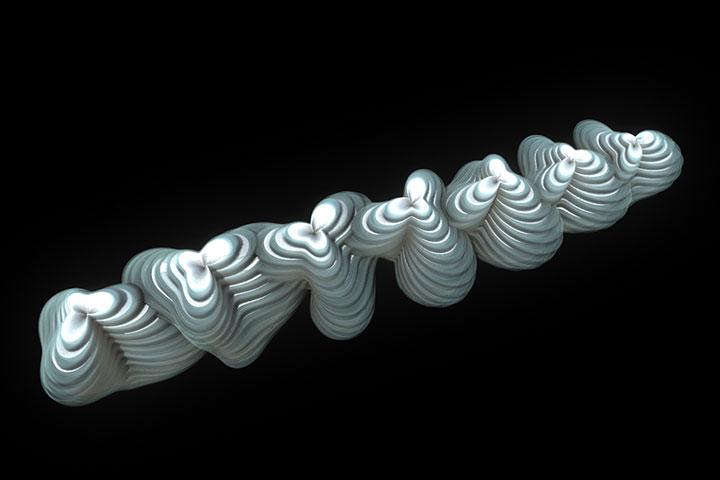 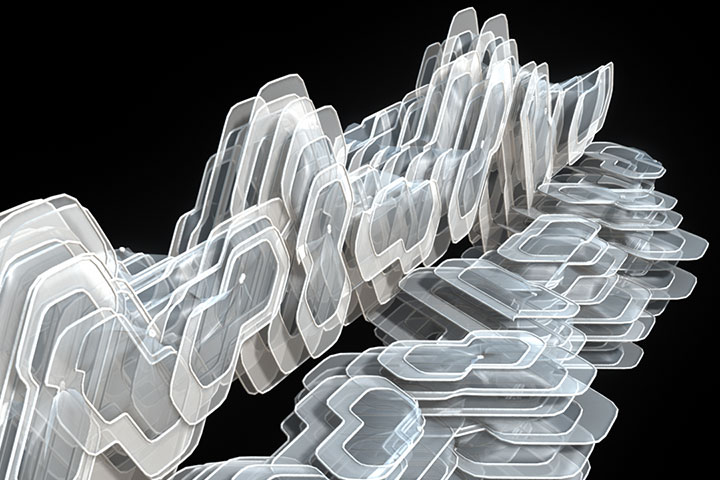 The L-Systems logic is particularly well suited to the production of modular systems. As not every letter of string needs to correspond to a turtle instruction, one can introduce letters that are simply replaced by groups of other letters. For example, in a system in which a implies move forward and c implies turn right, a new letter d could be defined to create a square:

A square, signified by letter d, can now be used as part of other modules, which in turn can become components of yet larger modules. Thus the L-Systems logic can be used not only to create a spatial organization of components, but for the differentiation and articulation of these components.

By introducing parameters into the component definitions - as described in the section above - the components become flexibile and adaptable to local conditions. 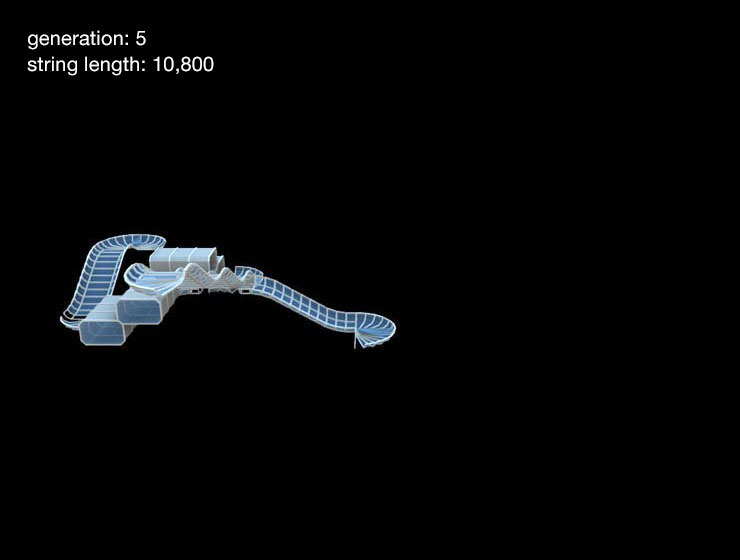 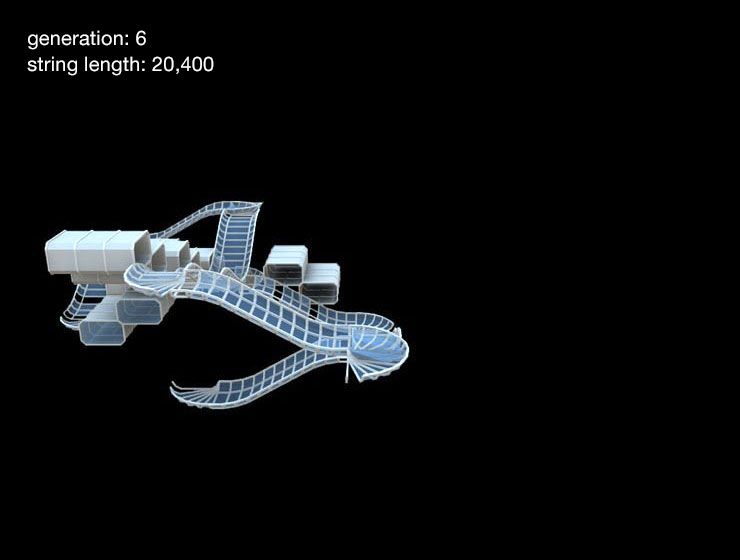 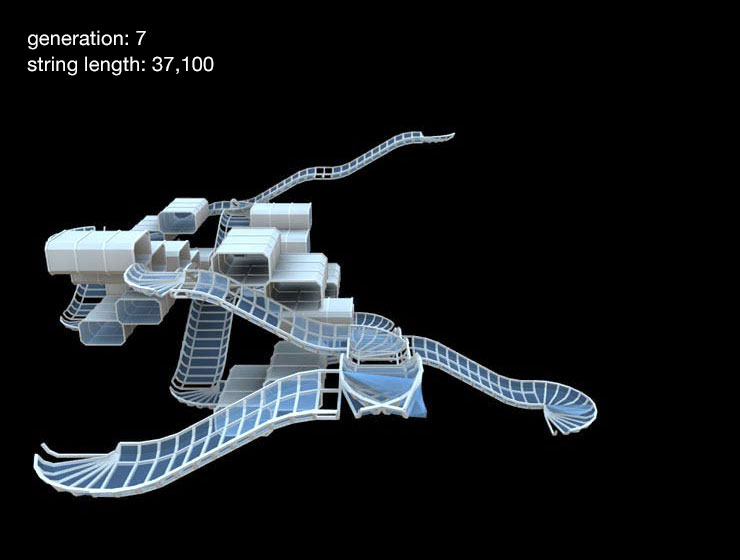 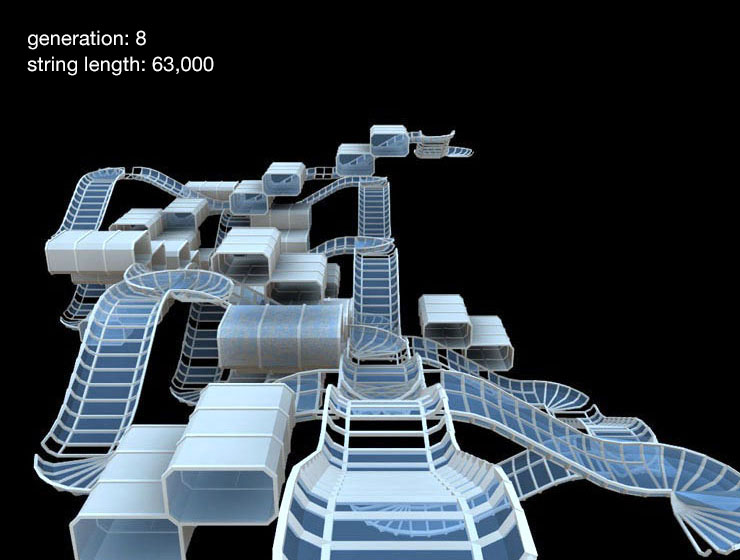 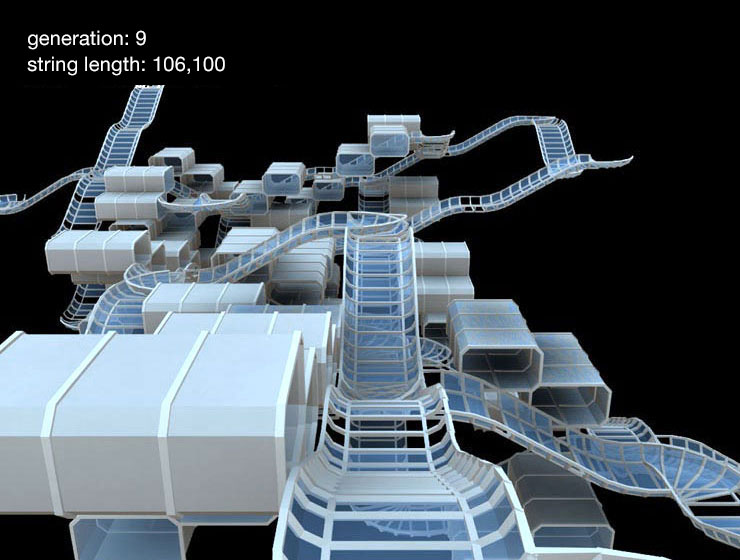 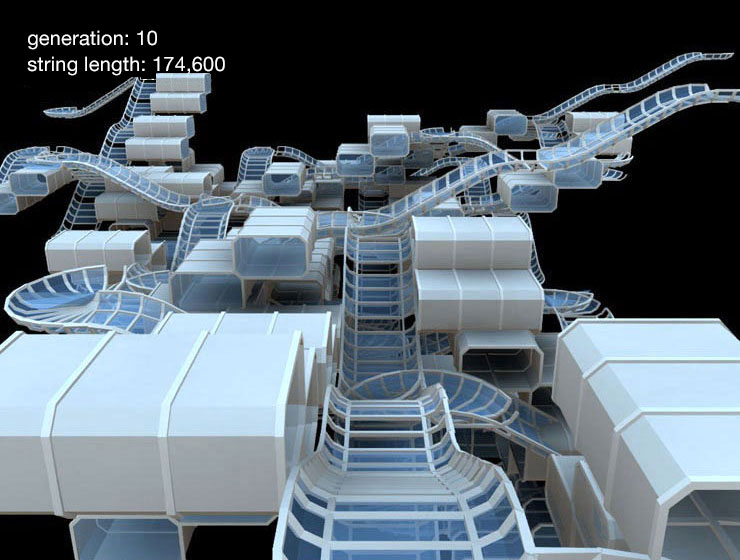 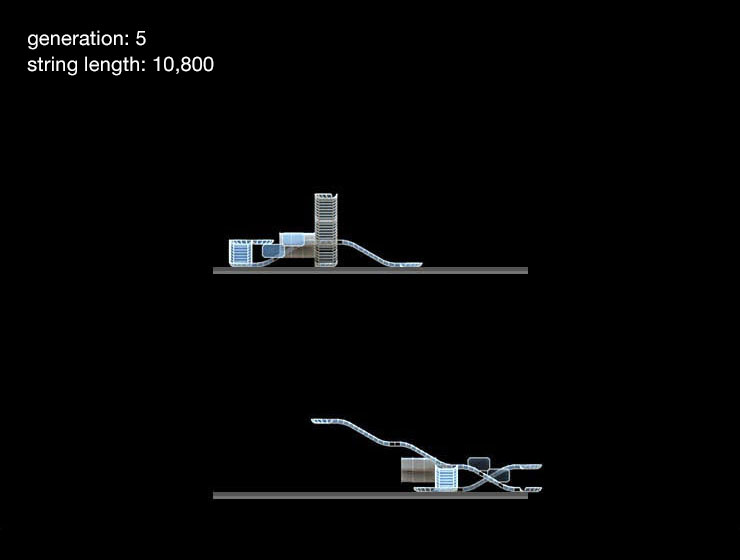 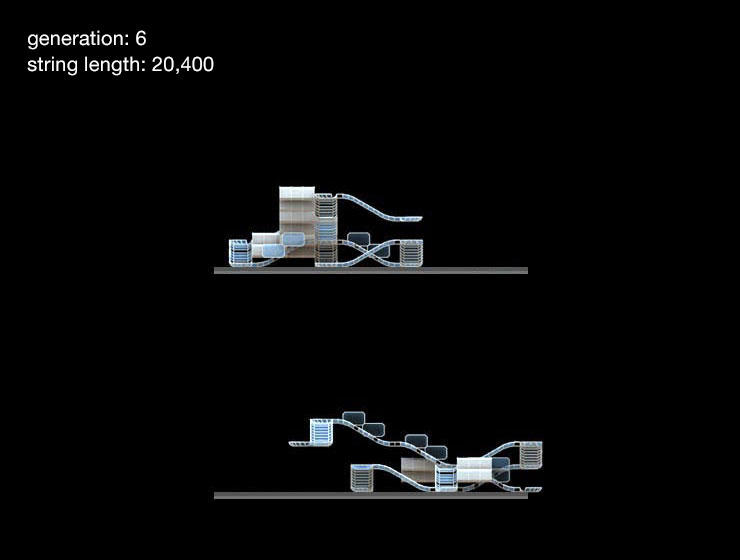 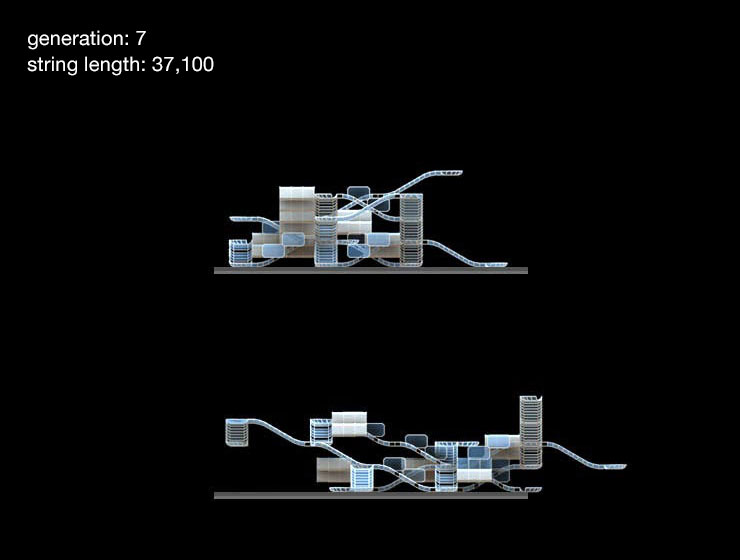 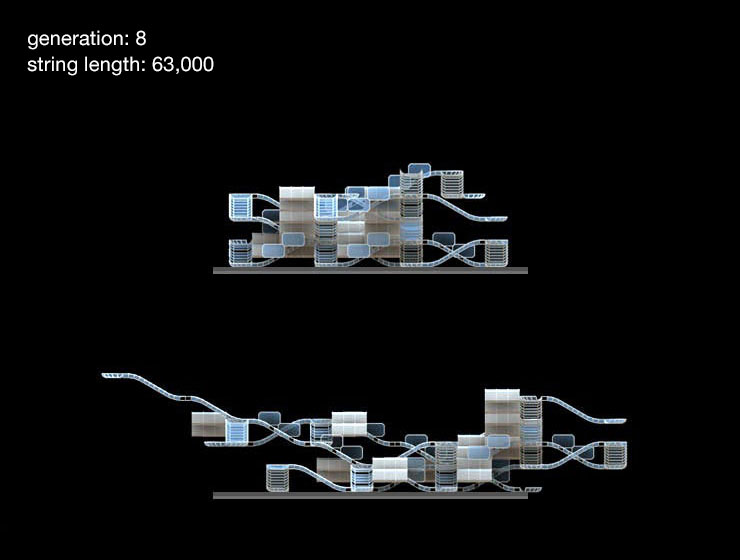 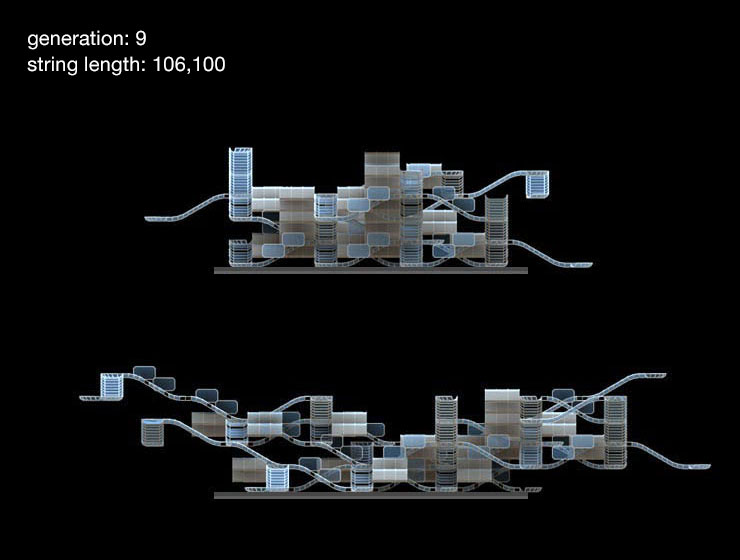 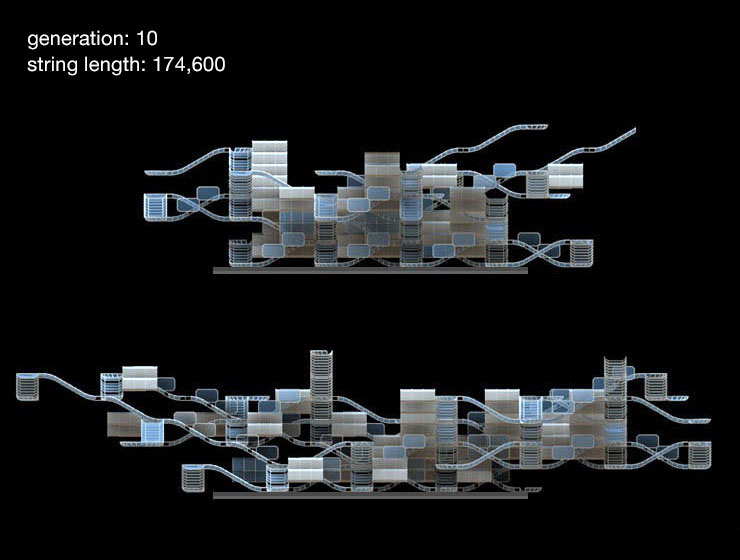 L-Systems can be a powerful design tool. Minimal inputs can create a spatially complex output. The string-rewriting logic is particularly suitable to forms that contain branching, recursion, and modularity. By expanding the logic to include independent parameters, one can not only gain a high degree of control over the produced form, but can potentially become adaptive.

Thus the constructive parameters of the form can be linked to the turtle's spatial position, orientation, and even to proximity to already produced components. A system that at first glance may appear overly deterministic thereby becomes highly responsive.

Does such an L-Systems process still model nature? Or should we try to explore the specific nature of these man-made processes?

All objects in this project are generated using a custom Excel program with VisualBasic macros. The Excel program creates the L-Systems string according to the specified replacment rules. It then interprets this string and produces a construction script (MEL) for the Maya CAD program to visualize the form.

The screenshots show three stages of the Excel program: 1) specification of the replacement rules, 2) generation of L-Systems string, 3) interpretation of the string as a construction script for Maya.