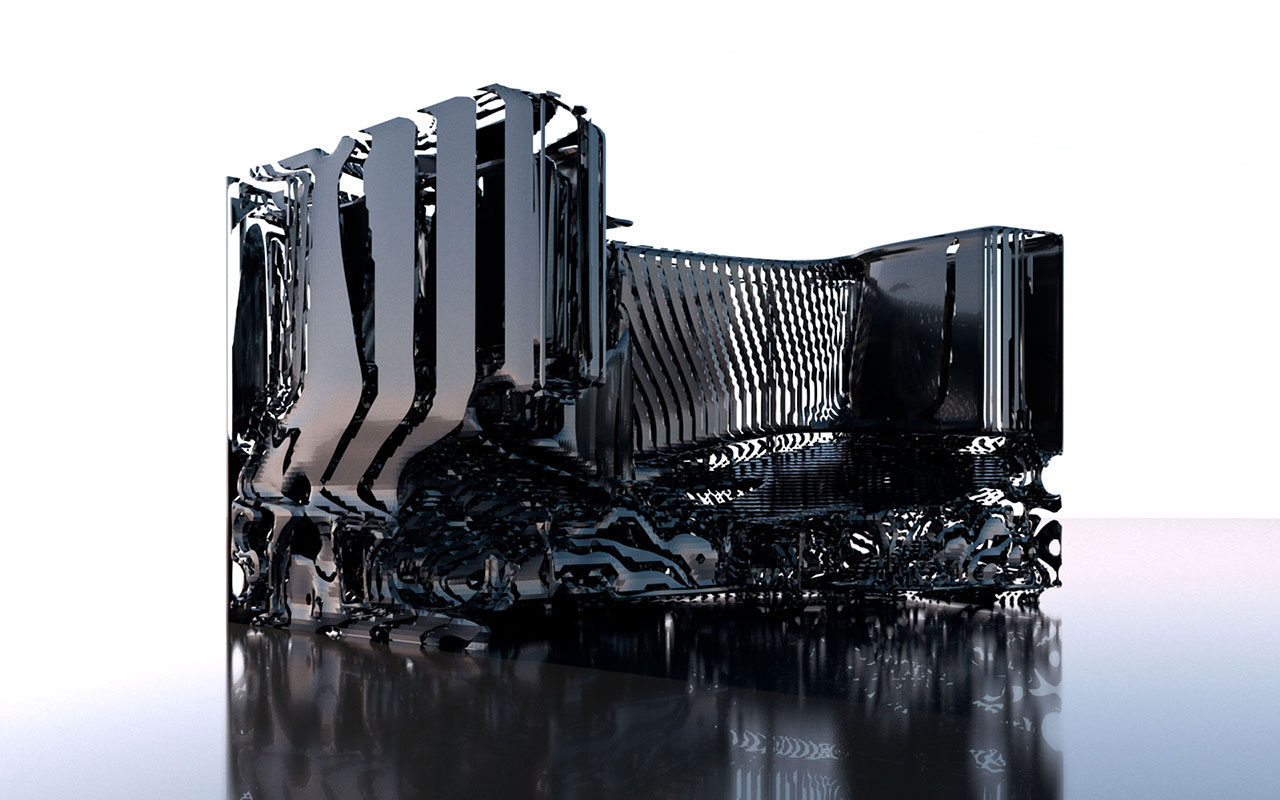 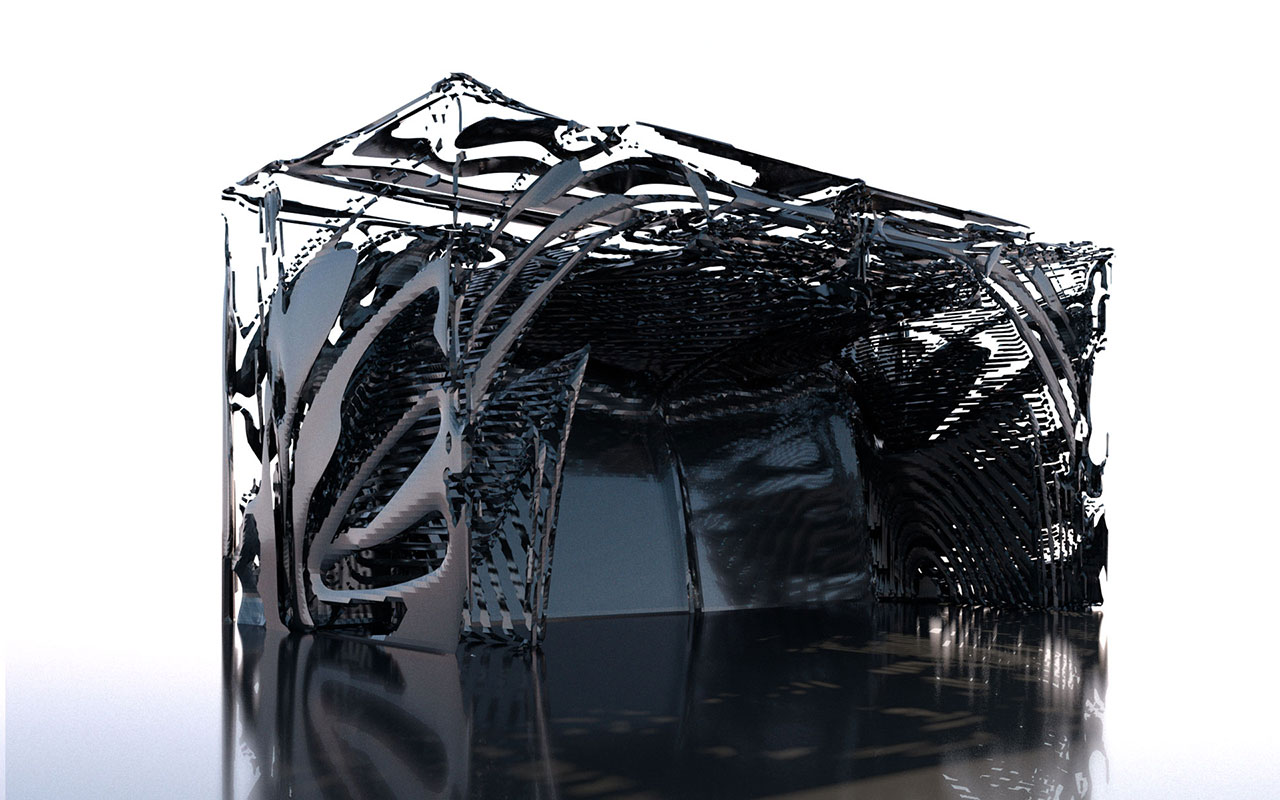 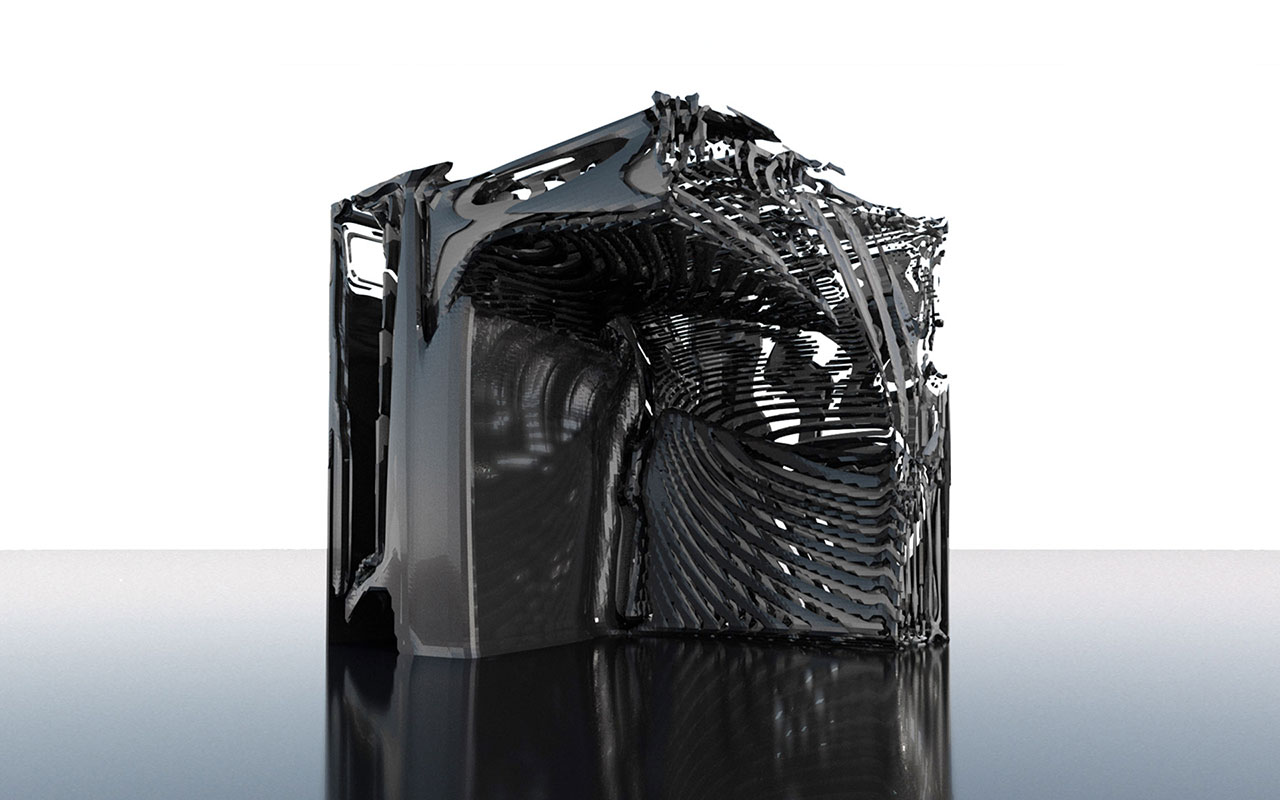 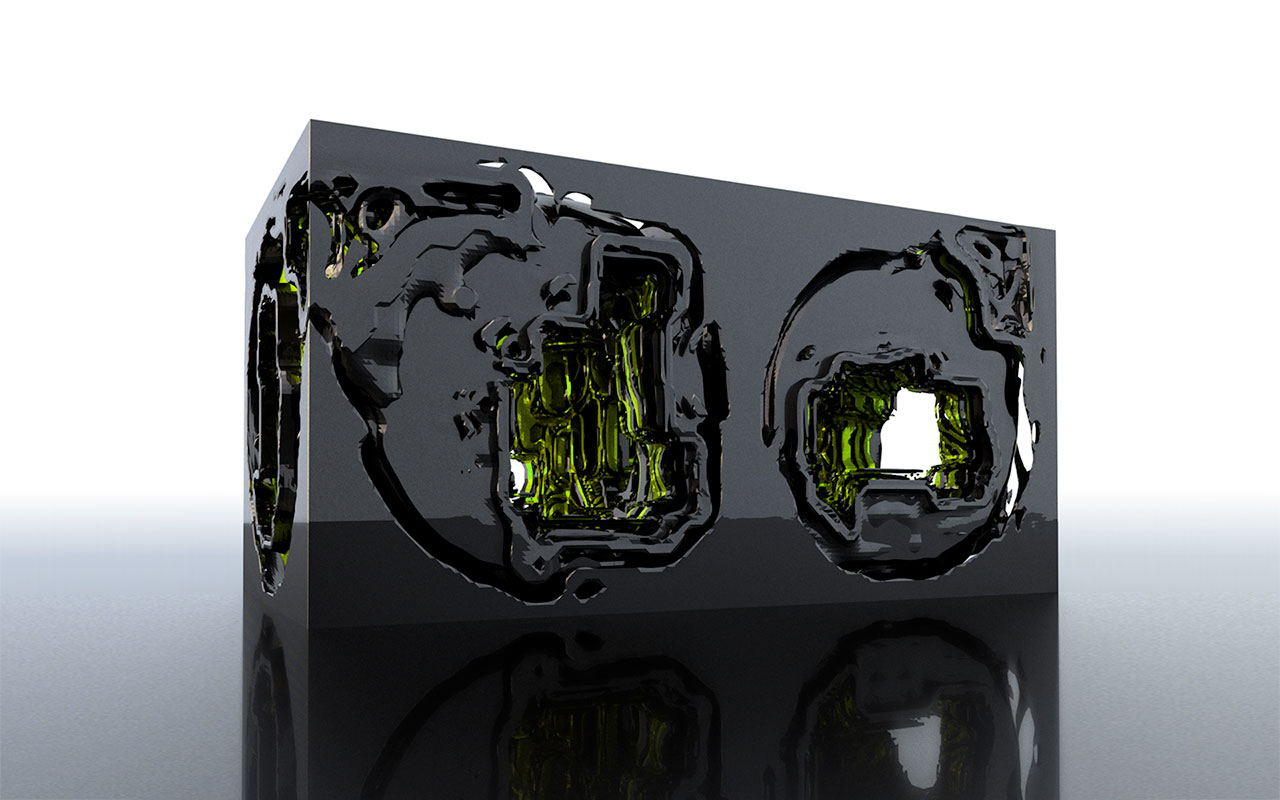 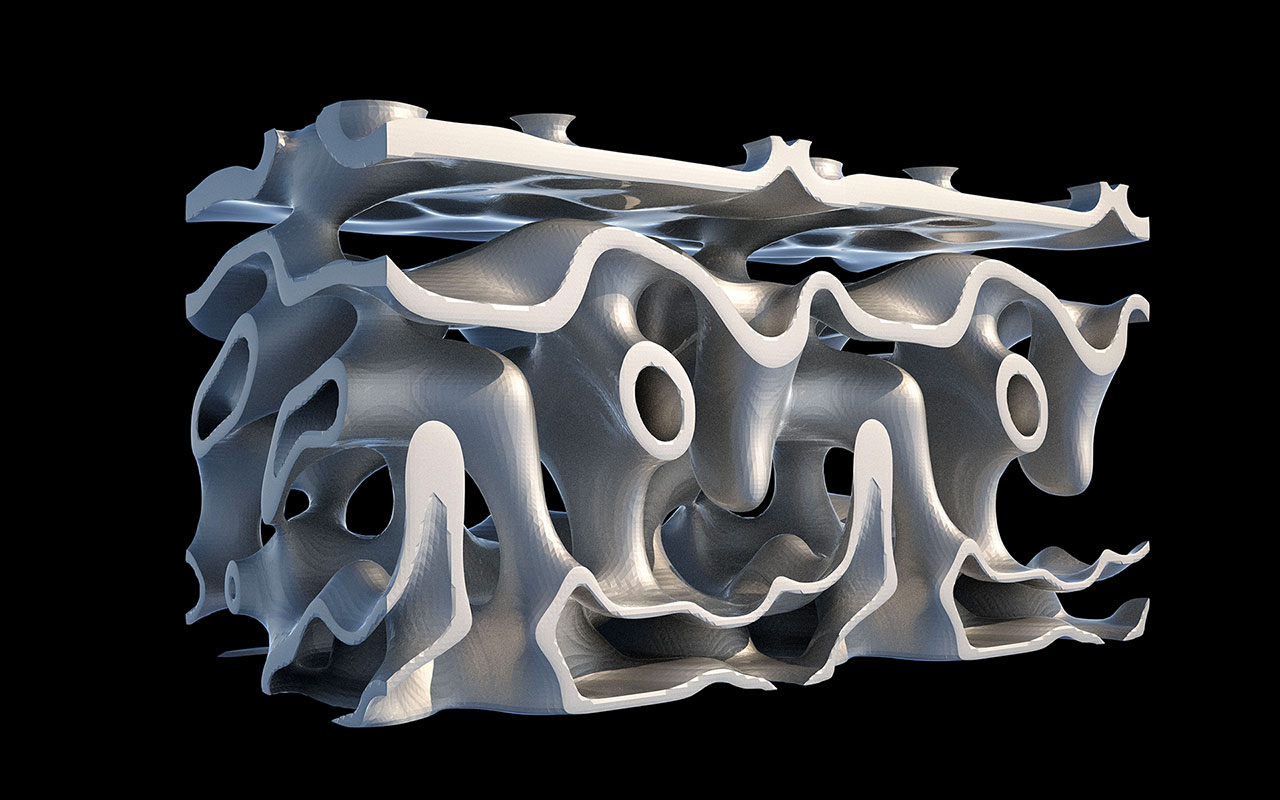 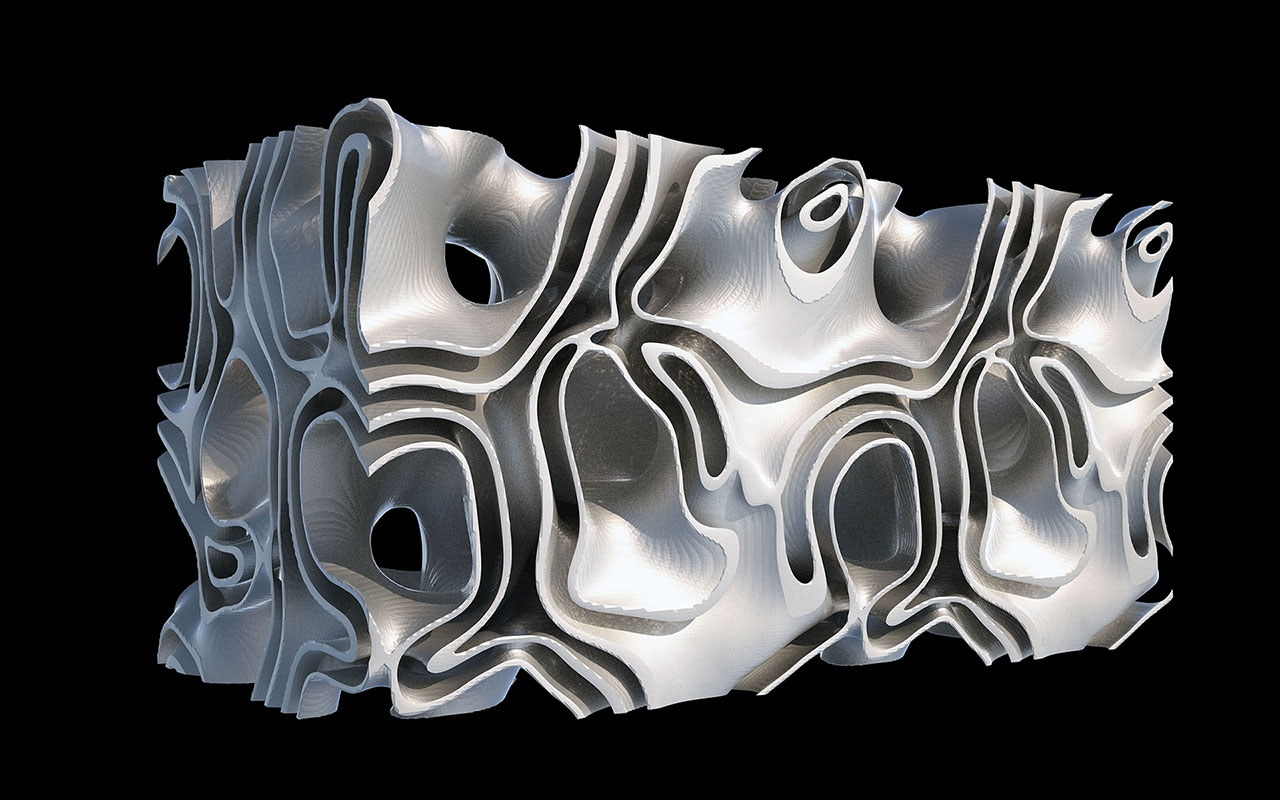 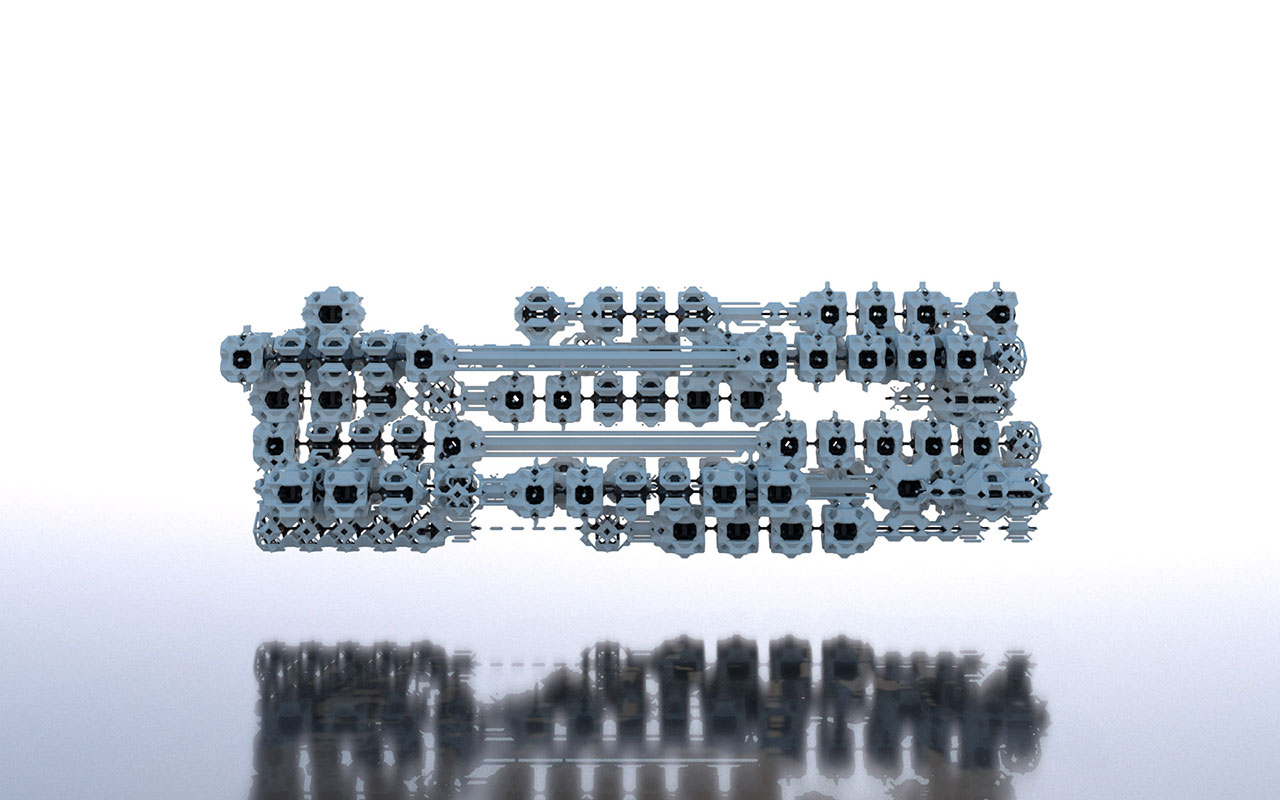 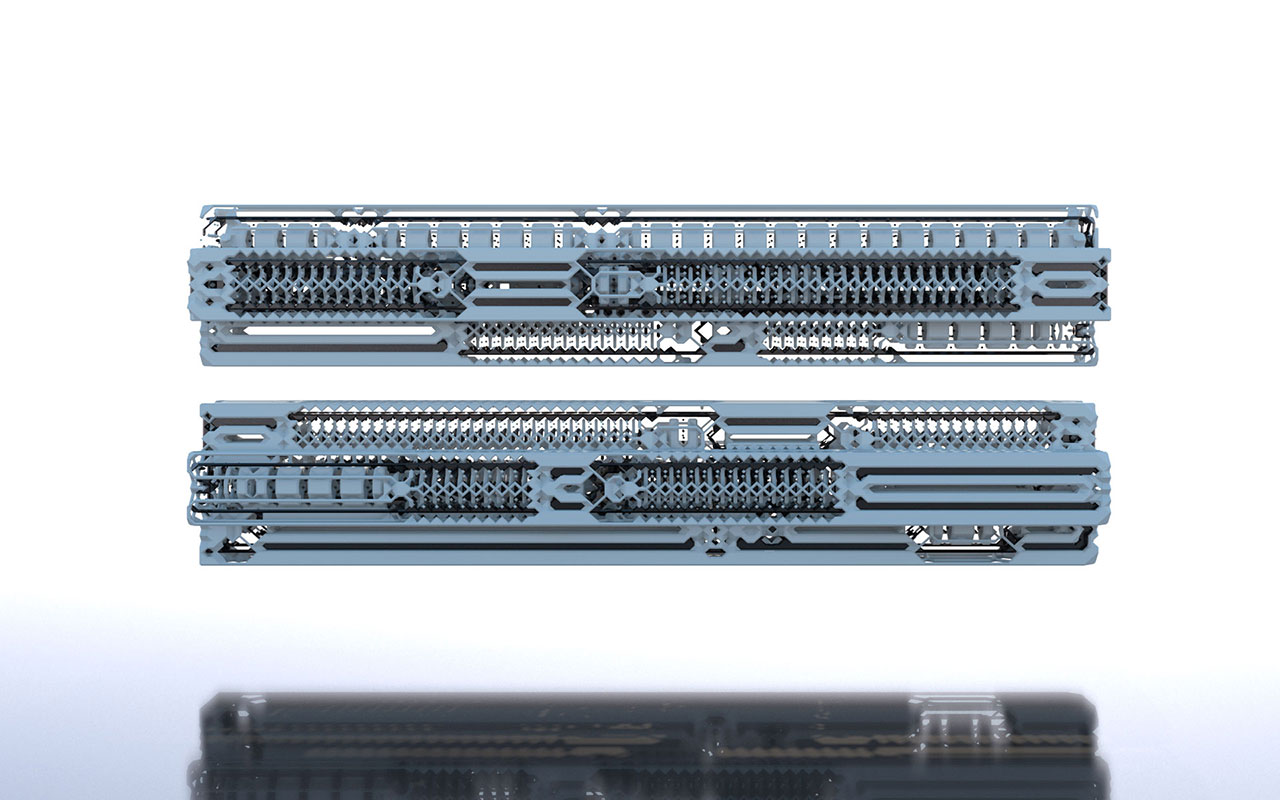 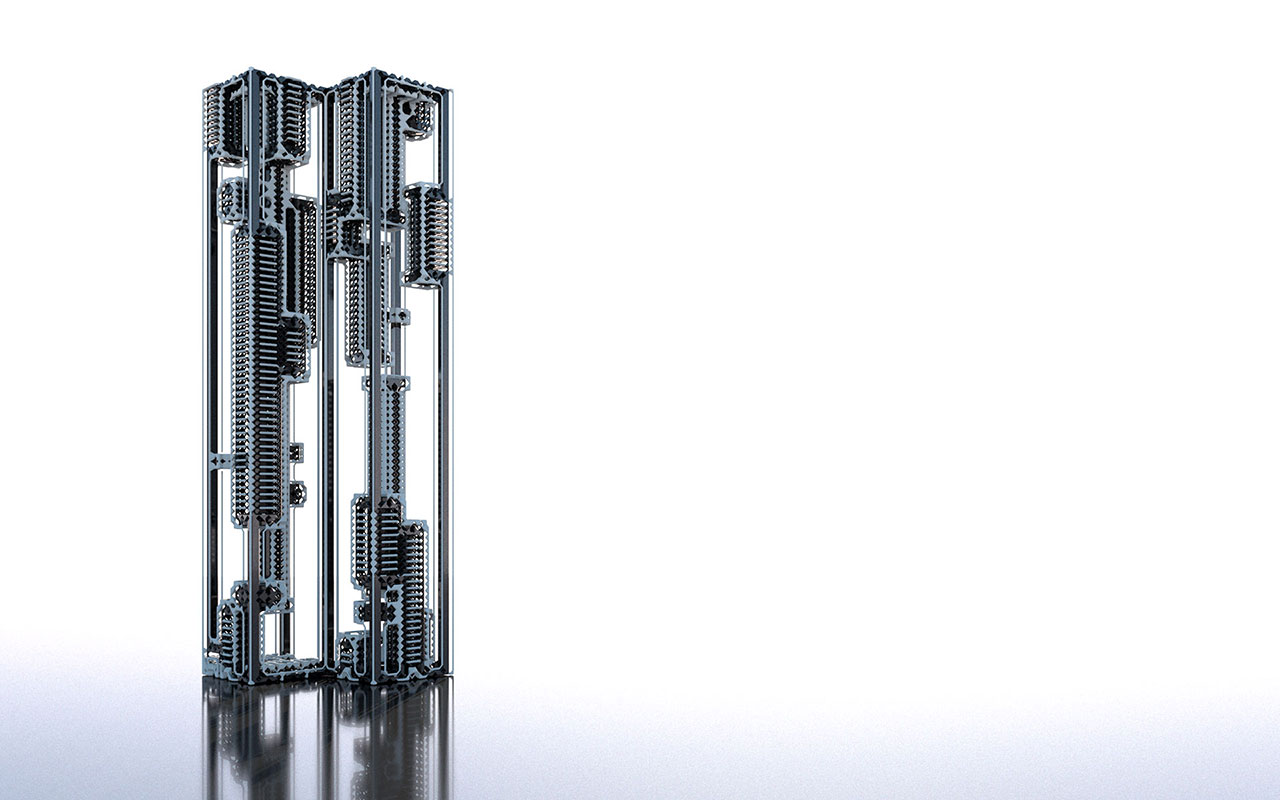 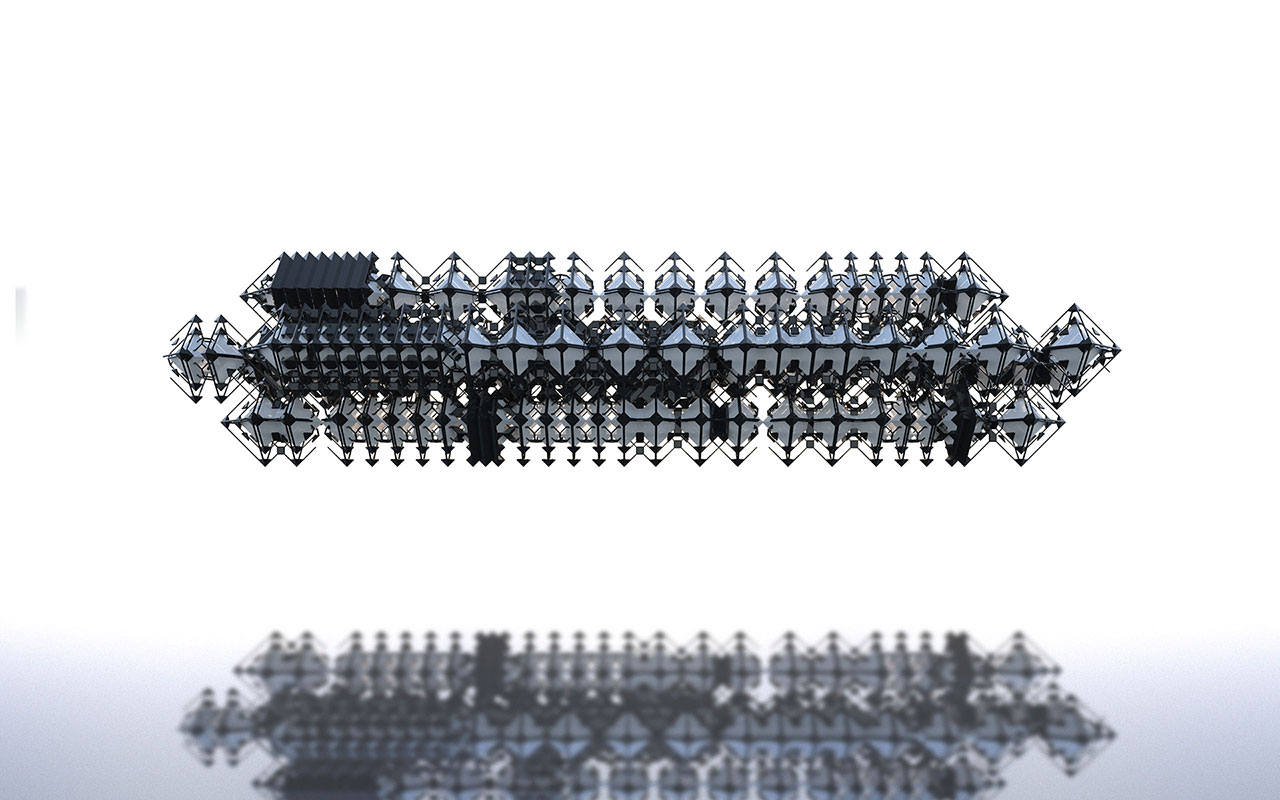 This project continues the exploration of a procedural approach to form. Rather than work with surfaces as in the subdivision experiments, this project uses volumetric cells - voxels - as its basic geometry.

These voxels contain data that can interact with data of proximate voxels according to pre-established sets of rules. By iteratively conducting these interactions, data can be propagated through the voxel space. Eventually this data can be visualized, either as individual elements, or as a hull surrounding elements with specific values.

Two broad algorithms to control the voxel interaction between are explored: cellular automata similar to the Game of Life, and reaction diffusion processes. In the former process, cells usually have only one of two states (on/off), the choice of which depends on the combination of the states of surrounding voxels.

The latter process, reaction diffusion, simulates chemical interactions between substances contained in the voxels. This process has been associated with pattern formation not only on a number of organisms, but also in the fields of geology and ecology.

As in the subdivision experiments, the input to the process (in this case the initial state) is kept to an absolute minimum. It frequently consists of a divergent value in a single cell or in a line of cells. The process' parameters, in turn, are allowed to fluctuate in both time and space. This can include specification of parameters through spatial gradients, as well as the use of emitters and vacuums.

Changes to these parameters lead to a truly astounding range of structures. Yet the process is very difficult to control in that the output is hard to predict. A miniscule change in parameters leads to the formation of an entirely different structure, or it can prohibit a structure from forming at all. A deliberate, constructive use of these processes on an architectural level appears a long way off.

In contrast to reaction diffusion systems, cellular automata are relatively easy to control. A cell only contains a single parameter describing its state, as opposed to several values representing its chemical concentrations. The production rules are limited to the combination of states of the cell's neighborhood.

In 3-dimensional space, this neighborhood can be understood as either six, eighteen or twenty-six cells. Rules can be formulated to maintain symmetry along all three axes, or to give the system a directionality. Initial states can be activated cells, as well as vectors of cells, fields, etc.

As in 2-dimensional versions, many of the systems exhibit an oscillating behavior. Certain systems fade into noise, some reach a very homogenous state, while others disappear altogether. Emerging configurations can be visualized as hulls using a marching cubes algorithm.

The resulting structures exhibit and astounding variety of features. Yet one thing that they have in common is that they only function at a single global scale. There are no regional variations in the dimensions of the structure or in the level of detail. As such, their application in architecture appears better suited to generating components of a structure rather than the structure itself. 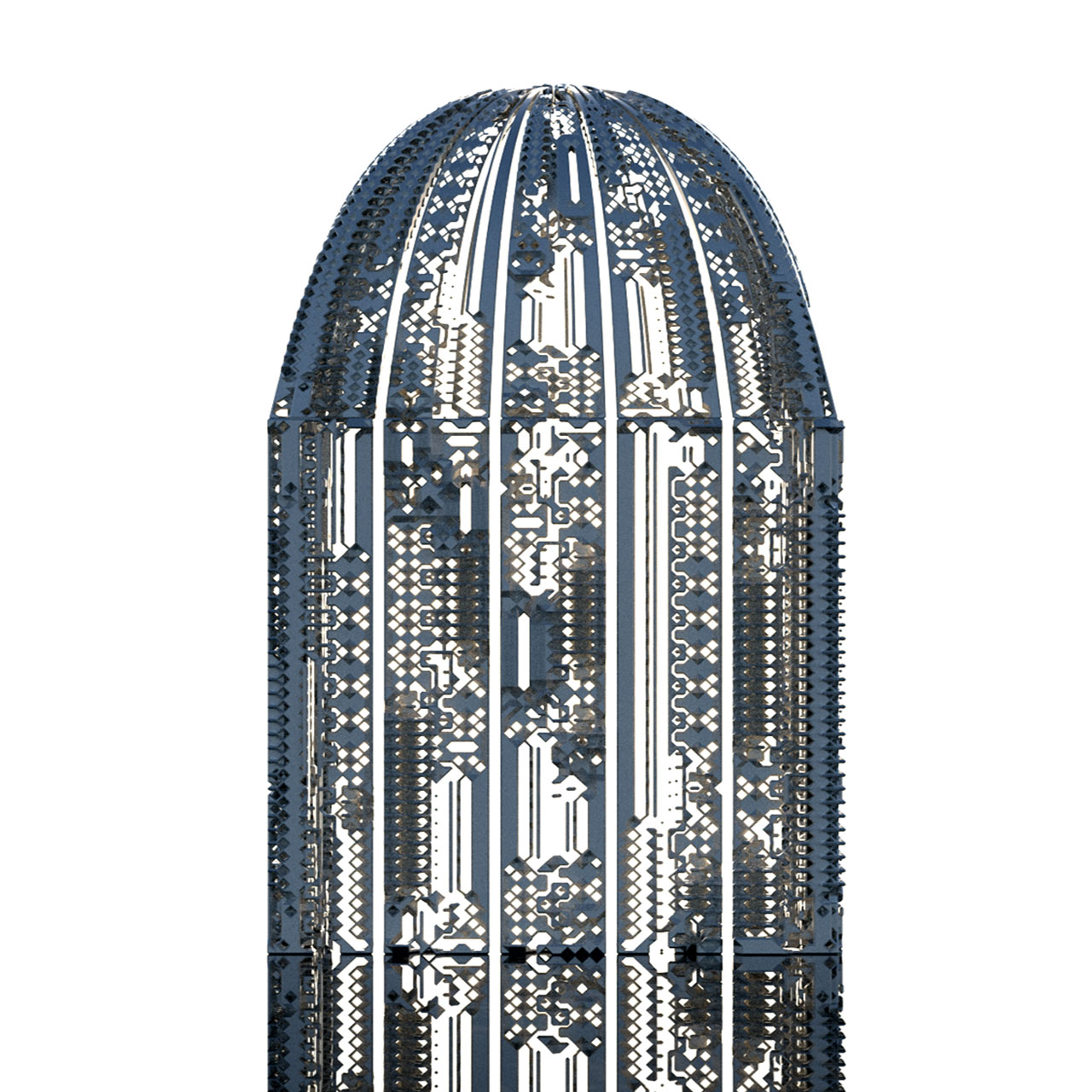 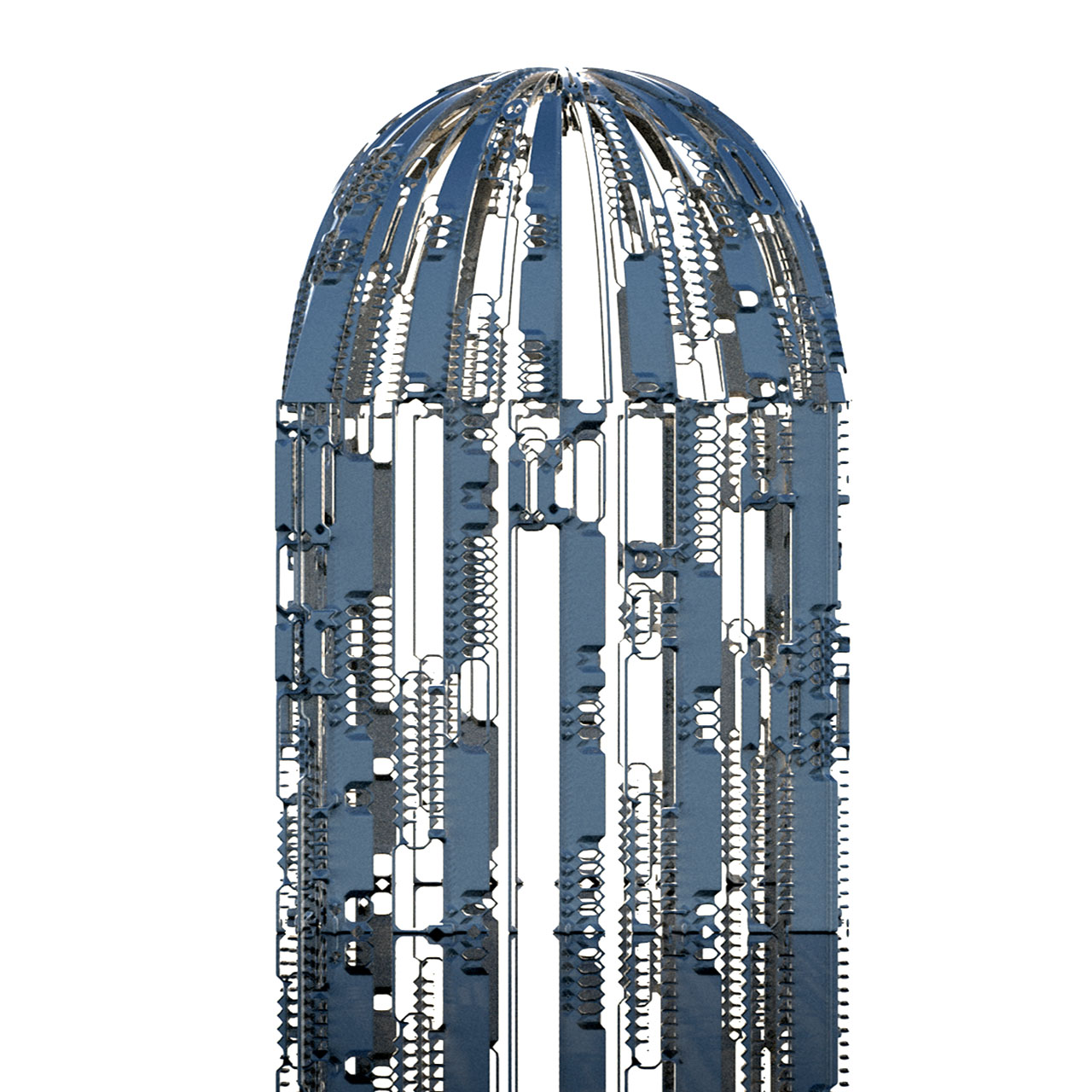 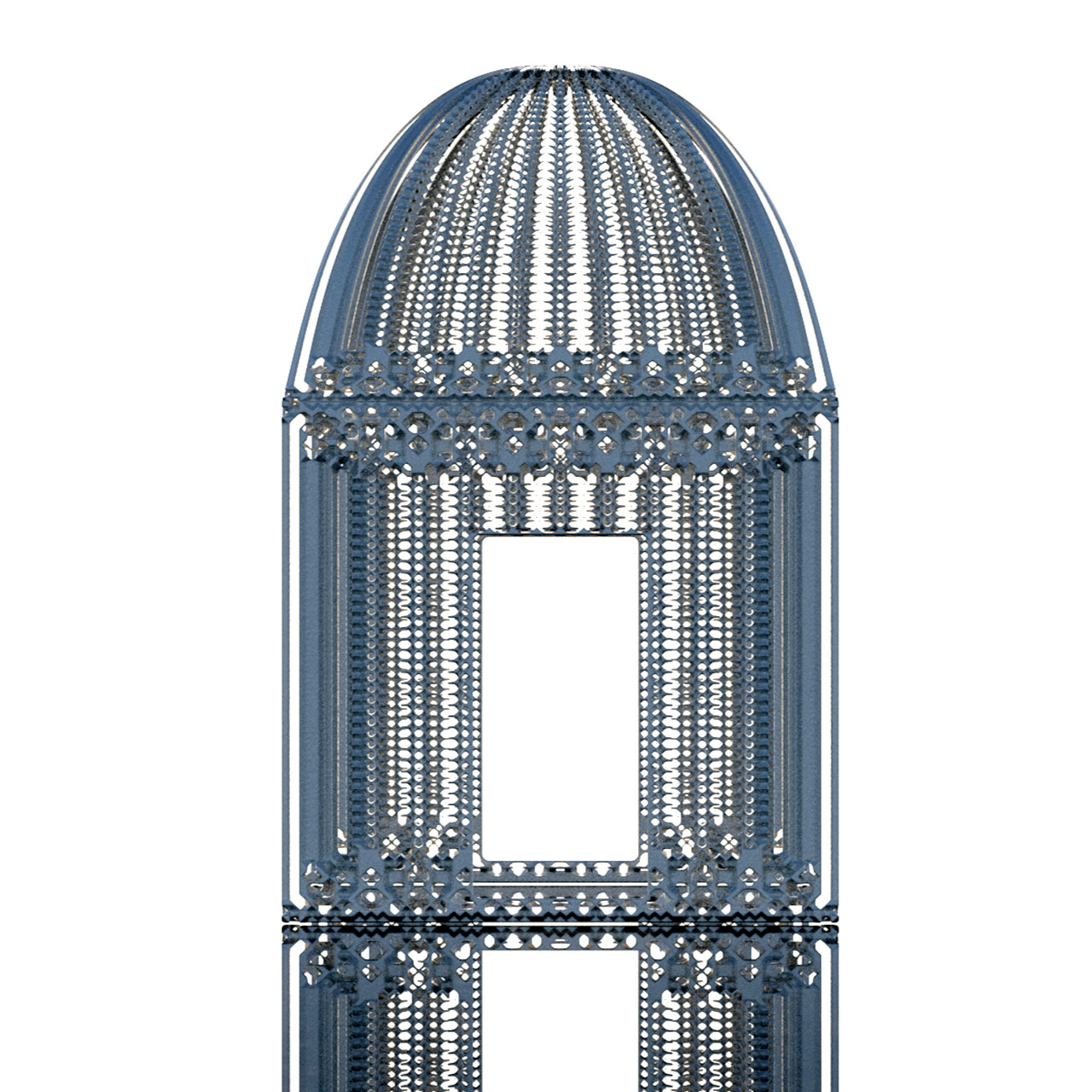 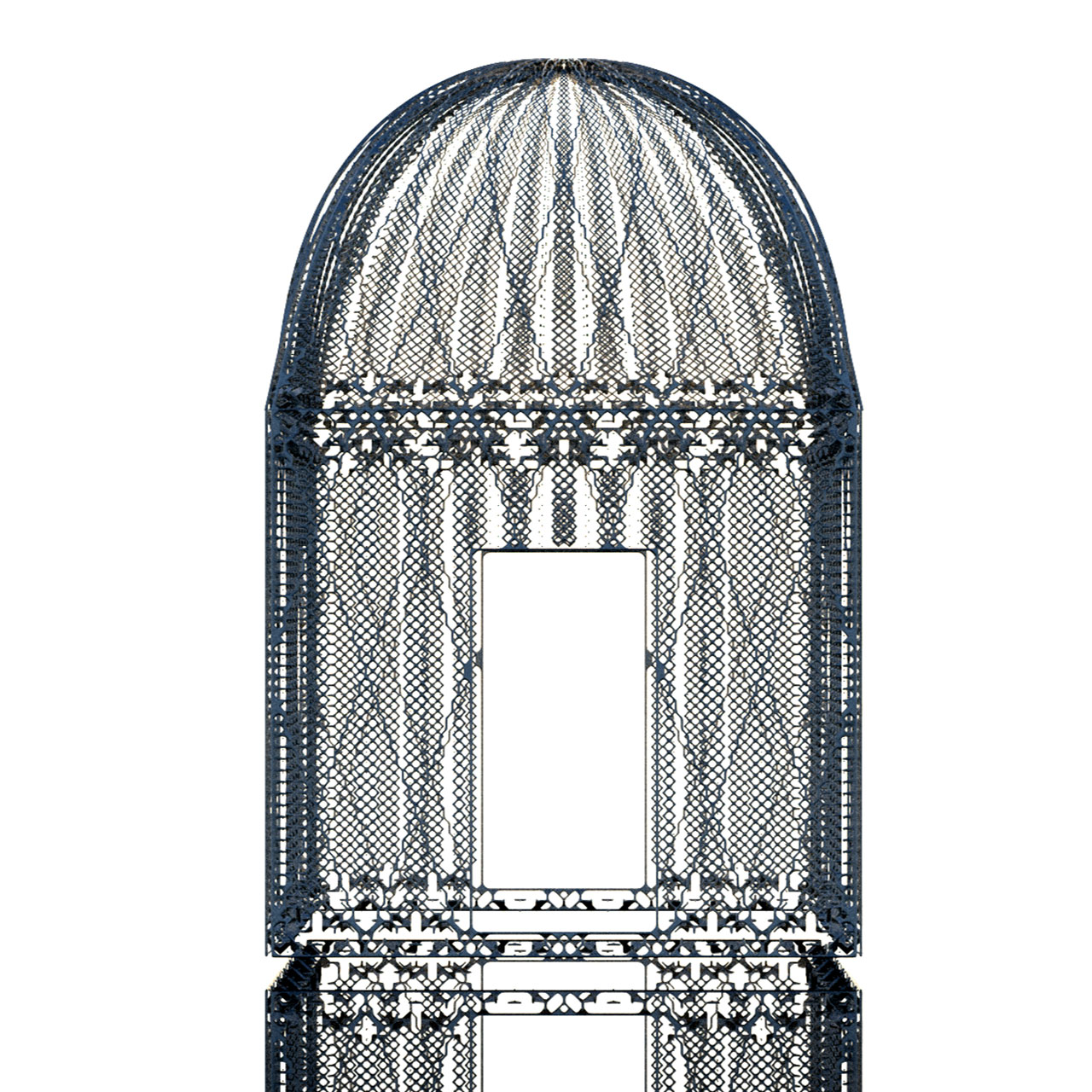 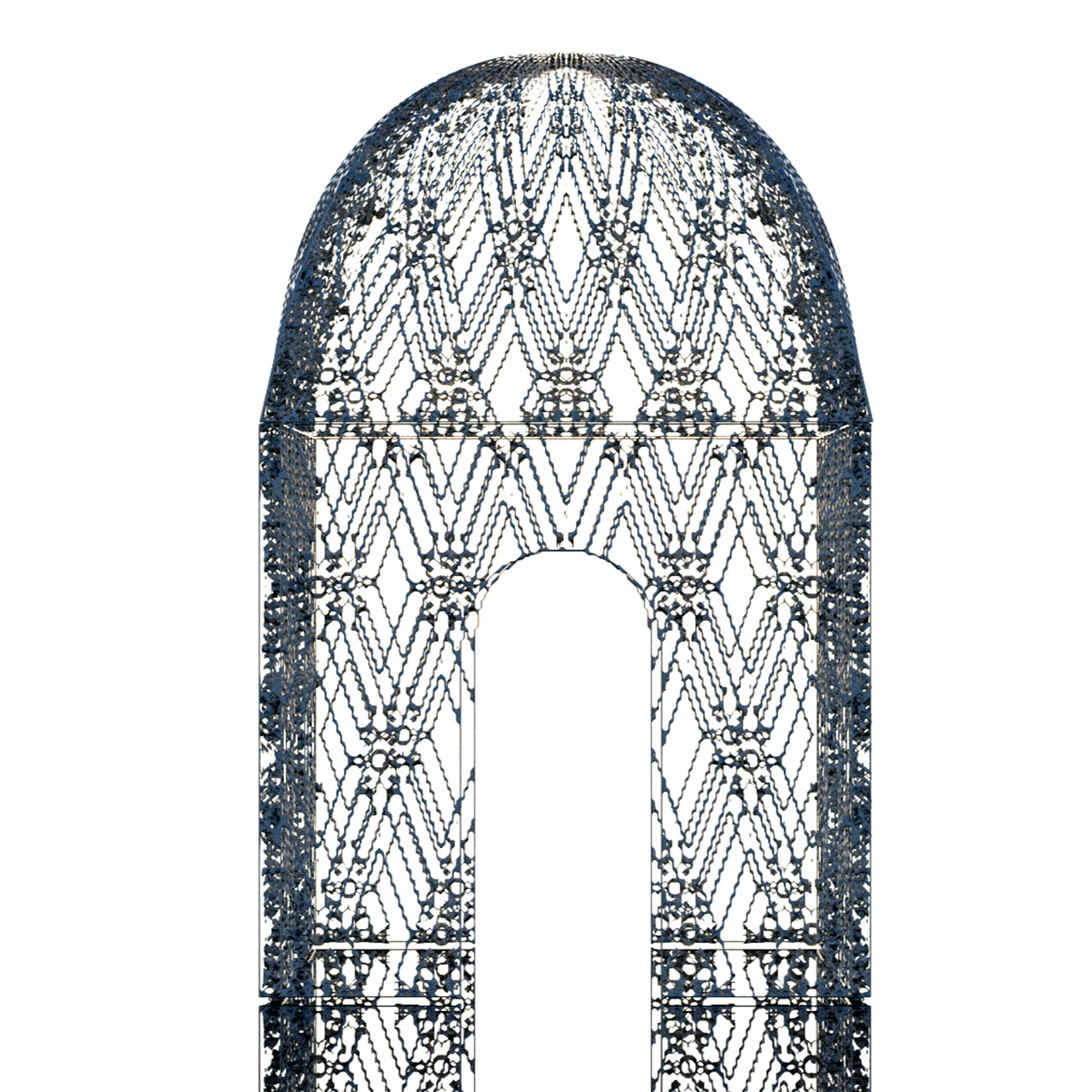