The White Tower (“Weisser Turm”) is a 29-meter tall, entirely 3D printed building situated along the Julier mountain pass in the remote village of Mulegns, Switzerland. Designed for Fundaziun Origen, the tower offers space for art installations and for music and theater performances. Visitors ascend a spiral staircase through a series of colonnades to reach the floating stage of the large hall on the top floor. The tower’s bold wealth of shapes is reminiscent of the great craftsmanship of the Graubünden master builders of the Baroque era who had a decisive influence on the regions' architecture.

Objectives The White Tower aims to bring new life to a village in decline. It tells of the rich cultural history of Mulegns and its surroundings. As a cultural destination, it promotes a gentle yet substantial tourism. Large parts of the tower will be built using an on-site fabrication lab. Thus, the tower brings valuable digital skills to the mountain regions and advances local trade.

Fabrication The White Tower demonstrates the groundbreaking possibilities of computational design and digital fabrication, which will fundamentally change conventional building in the years to come. Using robotic concrete extrusion processs, the concrete can be applied very specifically only where needed, thereby reducing consumption by a half. The process no longer requires any formwork. These technologies enable modular structures that allow for an on-site production, thereby reducing transport. The White Tower will be constructed with disassembly in mind so that it can be rebuilt at another location.

With its spectacular architecture and groundbreaking technology, the White Tower acts as a beacon and haven for travelers on the Julier Pass. As a new cultural destination, it welcomes visitors from the region and far beyond.

The White Tower contains a series of abstract, atmospherically dense rooms that are designed as a vertical enfilade. Rooms allow for various cultural uses and can host exhibitions and installations. The White Tower's large hall on the top floor contains a floating stage with seating for 45 visitors and is designed for concerts and theater performances.

The White Tower's central design element is a series of 104 3D-printed columns. These support the different levels of the building and they form the tower's façade. In the lower rooms, heavy, squat columns create narrow, imposing spaces. As one ascends the central spiral staircase, the rooms on the upper floors become noticeably lighter and airier. Each columns has two levels of ornamentation: a horizontal material-driven ornament, derived from extruded concrete printing process, and super-imposed spiraling texture that emphasizes the building's height.

The different column geometries enable strong spatial experiences, and are held together by the unity of their material. Overall, the building, which is made of white concrete, appears filigree and light. The bright materials and the bold structures promote the architectural play of light and shadow. The White Tower with its idiosyncratic openings appears as a lantern at night, and it becomes a lighthouse set along old Julier Pass road.

Setting: The Village of Mulegns

The village of Mulegns is set high up in the Swiss Alps along the Julier mountain pass. Historically, Mulegns was a stage coach stopover point for travellers between central Switzerland and the Engadin region, connecting Zurich with St. Moritz. Mulegns was initially a poor village, and many of its inhabitants emigrated to large cities to work as stucateurs and confectioners. The successful ones eventually returned home and built magnificent villas in Mulegns. As tourism began to develop, the village prospered further. At the eve of the first world war, the belle epoque Post Hotel Löwe at the center of Mulegns hosted American presidents, Russian nobility, prominent scientists and Nobel Prize winners.

Today the village of Mulegns is threatened with extinction. Many buildings stand empty, and the population has dwindled down to 16 inhabitants. The Nova Fundaziun Origen is trying to save the great cultural building stock of the village and trying to revitalize this historic place. The White Villa, which is now under federal protection, was recently rescued by means of a spectacular move. The historic Post Hotel Löwe has been restored and is receiving its first guests again. The White Tower project, as a beacon and haven on the old pass road, will continue writing and reinterpreting the history of this spectacular place.

The White Tower will be printed three-dimensionally using a concrete extrusion process developed at the DBT group of the Swiss Federal Institute of Technology (ETH). At a total height of 29 meters, the tower will be one of the world's tallest entirely 3D-printed structures. In this novel fabrication process, a robot successively applies 5mm thin layers of soft concrete through a nozzle. The material is soft enough to bond together and form homogenous components, while hardening quickly enough to support the successive layers.

Digital technologies are also used in the design process. The entire structure of the tower is designed using custom software that allows the precise definition of the geometry and can send the necessary data directly to the printing robots. This technology enables non-standard, tailor-made elements to be manufactured efficiently. These types of forms would be nearly impossible to produce at this scale using conventional technologies.

In this new construction process, the tower will assembled from 140 individually printed concrete elements. Elements are only filled with concrete where it is structurally required, which greatly reduces material use. This construction method avoids waste because no formwork for pouring concrete is necessary. The dismantling of the White Tower is already designed at the planning stage so that can be disassembled and rebuilt elsewhere.

A mobile factory will be set up on site, reducing the need to transport the large elements, and making the manufacturing process tangible for visitors. 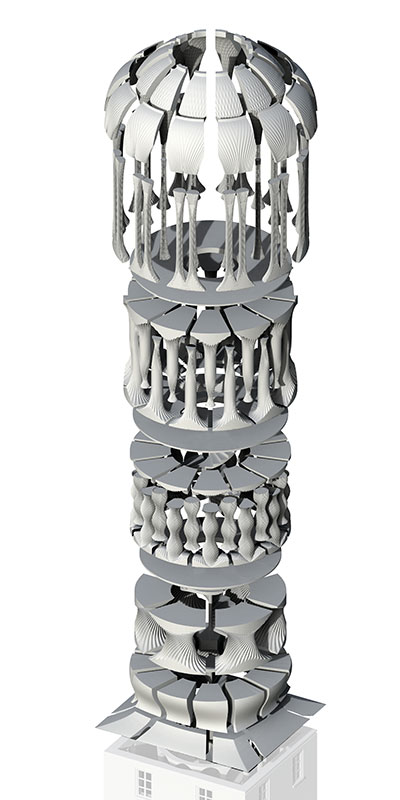 The White Tower ("Weisser Turm") is a project for the Fundaziun Origen, Riom, Switzerland
Previous Next

The White Tower project was officially launched by Fundaziun Origen on June 22nd, 2021 in Mulegns, Switzerland. The launch ceremony was attended by Swiss President Guy Parmelin, as well as the President of Graubünden Canton Mario Cavigelli and Surses Municipality President Leo Thomann.

The projected timeline for the White Tower is as follows: