We aim to create an architecture that defies classification and reductionism. We explore unseen levels of resolution and topological complexity in architecture by developing compositional strategies based on purely geometric processes.

In the Digital Grotesque project, we use these algorithms to create a form that appears at once synthetic and organic. The design process thus strikes a delicate balance between the expected and the unexpected, between control and relinquishment. The algorithms are deterministic as they do not incorporate randomness, but the results are not necessarily entirely foreseeable. Instead, they have the power to surprise.

The resulting architecture does not lend itself to a visual reductionism. Rather, the processes can devise truly surprising topographies and topologies that go far beyond what one could have traditionally conceived.

Digital Grotesque is between chaos and order, both natural and the artificial, neither foreign nor familiar. Any references to nature or existing styles are not integrated into the design process, but are evoked only as associations in the eye of the beholder.

As a fictive narrative space, the Digital Grotesque project is less concerned with functionality than with the expressive formal potentials of digital technologies. It examines new spatial experiences and sensations that these technologies enable. As such, Digital Grotesque is a lavish, exhilarating space, full of details at the threshold of perception, waiting to be discovered and spurring one's imagination of what is yet to be created.

In computational design, the architect no longer develops form by pen on paper, or by mouse in CAD program, but instead defines procedures to generate form. Shifting the design process onto this abstract plane has a dramatic impact: at the level of the design process, thousands of variants of a form can be generated, and these can be futher developed in parallel. A single process can create entire families of forms, which can be cultivated over many generations.

At the level of the forms themselves, design by algorithm allows a complexity and richness that would be nearly impossible to draw by hand, and would be equally laborious to draw in a 3D CAD program. These complex forms can be brought out of the computer using additive manufacturing. Bits and bytes can be rendered directly into reality.

The combination of computational design and additive manufacturing can lead to a non-standardized, highly differentiated and spatially complex architecture that is defined at the scale of millimeters. In Digital Grotesque, every detail of the architecture is generated through customized algorithms, without any manual intervention.

At a basic level, the algorithm used to generate the Digital Grotesque room functions by gradually refining and enriching a simple input form. The surfaces of a form are divided into smaller surfaces, and these in turn are divided again and again. Changes to one surface propagate down to its children. By altering the division ratios, one can control the geometry of the form.

Using this simple process, one can create astoundingly complex geometries with only a few subdivision steps. By changing the division ratios, one can also generate a surprising variety of forms. The process remains entirely the same; only the division parameters are altered.

This example sequence shows variants of square that is being successively divided into smaller squares, while the division ratio are altered. While this example is two-dimensional, the same principle also works for three-dimensional forms.

Subdivision of a square

While computational geometry in architecture is often used to create volumes with smooth, minimal surfaces, in Digital Grotesque the design goal is exactly the opposite. We sought to achieve maximal articulation of surfaces to create volumetric depth. Light is reflected in countless directions and the boundaries of the architecture are spatially diffuse.

The subdivision process that is used to articulate the form produces information at multiple scales. The closer one gets to the form, the more features one discovers. Such a hierarchical differentiation can also be found in classic architecture. Yet unlike traditional architectural design processes, here a single process is used both to sculpt the overall form, and to create the minute surface details. This procedural articulation can be used to create features that exceed the threshold of immediate haptic and visual perception.

Information at the threshold of perception
Previous Next

Fabrication: Castles Made of Sand

Digital Grotesque is the first human-scale immersive space entirely constructed out of 3D printed sandstone. A complex geometry consisting of millions of individual facets is printed at a resolution of a fraction of a millimeter to dimensions of a 3.2-meter high enclosed space. Its geometry was entirely designed through customized algorithms.

The application of 3D printing technology in architecture has up to now been limited to prototyping or producing small-scale models. Material costs are high, machines have limited scales, and the majority of materials are not strong enough to fulfill construction requirements.

Sand-printing technology has recently emerged as an additive manufacturing technique that overcomes these limitations. This technology is currently used primarily to create casting forms for industrial applications. Yet it has unique features that make it suitable to create architectural components. Specifically, it allows the fabrication of large-scale elements (currently up to 8 cubic meters in size) with high resolution and accuracy at a competitive price and in short period of time. In compression, these printed elements behave similarly to natural sandstone

In using this 3D printed technology, ornamentation and free-form geometries are no longer a prohibitive cost factor. The scale of potential thee-dimensional differentiation is brought to a micro-level. This technology promises a larger compositional and constructive freedom and a rationalized fabrication of unique, non-standardized architecture.

For Digital Grotesque, we developed an innovative construction system based on a discrete assembly of smart bricks. These 3D printed bricks can have surface formations at a previously unseen level of detail. Internally, they are partially hollow with a sub-interior structure to reduce material according to force flow. The bricks have integrated labels as well as alignment and lifting details that enable a mortar-free assembly. All of these features are directly printed into the brick, without the need for any secondary material or processes.

In Digital Grotesque, these self-supporting bricks are dimensioned to fit onto standard Euro pallets [120x80cm] for easy transport. The material thickness of the bricks varies with their position within the structure and with the loads they need to sustain.

Schematic of overall structure and of individual bricks 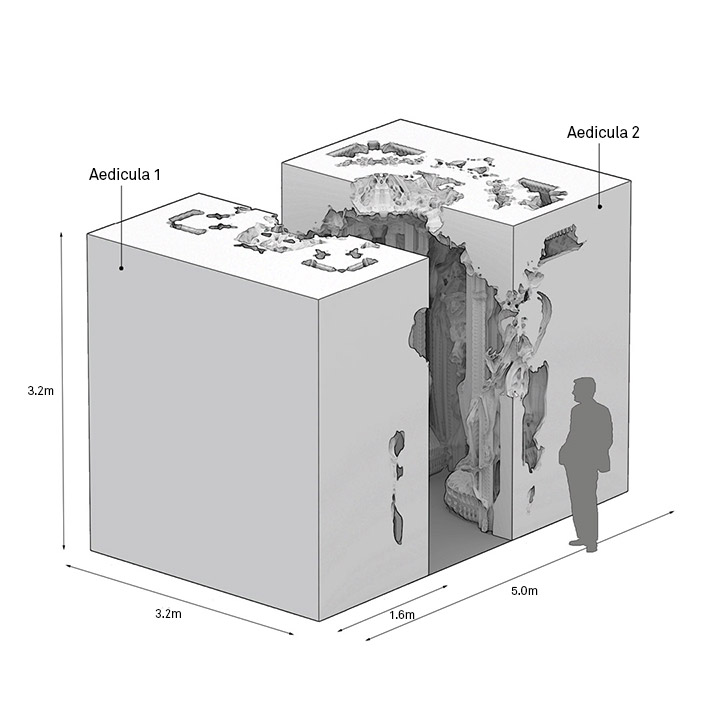 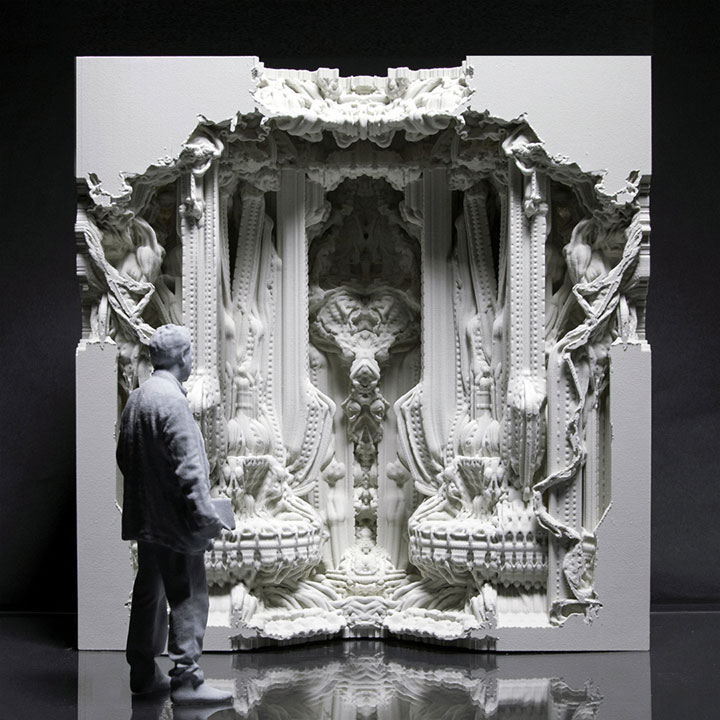 Digital Grotesque's elements are printed using sand (silicate) and binder. The build box of the printer is 4.0 x 2.0 x 1.0 meters, allowing the production either a very large element, or of many elements in parallel. Each printed layer is 0.3mm high, with a planar resolution up to 300dpi. Printing time of a full box is between one and two days.

After printing, loose sand that has not been bound is vacuumed out of the print box, and remaining grains of sand are brushed or blown off the printed forms.

Printing costs are measured according to the bounding box of the printed forms. Thus, printing the most complex form conceivable costs no more - and takes no longer - than printing a simple box. By this logic, printing hundreds of individual forms costs no more than printing the same one over and over. Complexity and customization are no longer impediments in design, but rather are opportunities waiting to be explored.

Natural sandstone has been used as building material since prehistoric times. Cathedrals, temples and other ornamental structures were often constructed with sandstone, as it is a relatively soft material that is easy to work while still having structural resistance. 3D printed sandstone has very similar properties once it is post-processed.

In order to further harden the micro-detailing of the grotto (local parts are thinner than 2mm) and to increase the structural stability, the printed sandstone is infiltrated with resin. This resin closes the pores of the artificial sandstone.

Different coatings have been tested with the goal of creating a smooth surface without a significant loss of detail. In contrast to the highly technological fabrication-process, traditional methods from conservationists of historic Swiss sandstone buildings were applied. Numerous gilding tests were performed, before selecting a traditional coating consisting of pigment, alcohol and shellac.

Spraying of water-based paint
Previous Next

New materials and fabrication methods have historically led to radical changes in architectural design. They have indeed been primary drivers in its evolution. Today, additive manufacturing heralds a revolution in design. Yet in architecture, this technology has up to now been used only for small scale models.

Digital Grotesque takes additive manufacturing technology to a true architectural scale. Digital Grotesque presents a fully immersive, solid, human-scale enclosed structure with a perplexing level of detail. Its geometry consists of hundreds of millions of individual facets printed at a resolution of a tenth of a millimeter, constituting a 3.2-meter high enclosed space.

The potentials of additive manufacturing in architecture are enormous. Architectural details can reach the threshold of human perception. There is no cost for complexity: printing this highly detailed grotto costs the same as printing a primitive cube. Nor is there a cost for customization: fabricating highly individual elements costs no more than printing a standardized series. Ornament and formal expression thus cease to be a luxury. What can we do with this newfound freedom? In a 1971 lecture to students, Louis Kahn stated:

The question today is: What would a grain of sand like to be?

Digital Grotesque I in Figures

Research for Digital Grotesque I was carried out at the Chair for CAAD at the Swiss Federal Institute of Technology (ETH) in Zurich. All components were printed by Voxeljet AG. Digital Grotesque I is a commission by FRAC Centre, Orléans, for its permanent architecture collection.