Muqarnas - elaborate ornamental vaultings - are some of the earliest and most impressive examples of a rule-based architectural design. They combine architecture, mathematics, and art to form highly intricate and complex stalactite structures. The beauty of these abstract, non-figurative formations has fascinated people throughout history.

Today, advances in computational design and digital fabrication invite us to revisit these typologies. How can computation and robotic fabrication bring the splendor of such a rule-based geometric art into the future? Can the computer help us to explore new and unseen muqarna formations? In this project, the computer becomes a tool for search and exploration, a partner in our quest for the hitherto unseen. It allows us to create objects of exceptional breadth and depth: endless permutations of designs with a richness of detail that can once again evoke marvel, curiosity and bewilderment.

Muqarnas date back to the 11th century Seljuk dynasty. They were initially structural elements of transition between a square floorplan of a building and the circular base of its dome. These structural transitions consisted of several stacked, overlapping horizontal layers. Over time, connections between the layers became increasingly articulated, and muqarnas came to be more and more sculptural. Gradually, a complex system of ornament emerged that was independent of any structural functionality.

Muqarnas developed into an archetypical form throughout the Islamic world, adorning interiors and portals of mosques, madrasas, shrines, and palaces. The saturation effect produced by their thousands of individual facets is said to evoke the star filled sky, while their vaulted form is sometimes associated with the cave in which prophet Mohammed's enlightenment took place.

Over the centuries, endless geometric variations of muqarnas were constructed - many with a remarkable ingenuity and visual complexity. The underlying constructive principle of these designs is identical: a step-wise transition between two geometries expressed as a sequence of individual tiers. These tiers can be depicted in a single ceiling plan as contour lines.

Despite their simple constructive logic, ceiling plans of historical muqarnas oftentimes contain complex geometrical patterns. These patterns can include nonperiodic tilings with multiple degrees of rotational symmetry. It is arguably the compositional combination of simple horizontal layering with these complex planar tilings that is the origin of muqarnas' appeal and that has fascinated viewers throughout the centuries.

How can we formalize a simple yet open-ended algorithm that allows us to design intricate muqarnas? Can this algorithm help us to explore new and unseen muqarna formations?

The algorithmic approach in this project centers on the design of muqarna ceiling plans. It uses a selective subdivision algorithm to generate and successively refine these plans.

Given two countour lines representing the top and bottom planar outlines of a muqarna, this algorithm recursively subdivides the space between these lines into smaller and smaller tiles. To allow variations to take place - both between ceiling plan designs and locally within them, the algorithm's subdivision operation is applied selectively rather than uniformly. Topological and topographic features of each tile determine whether it is subdivided during a particular iteration of the process. In a subsequent step, contour lines are drawn between tiles of different tiers, and the ceiling plan is vertically extruded into a 3-dimensional geometry

Such an algorithm can be used to replicate historical muqarnas, but also to generate entirely new ones. The computer can produce millions of tiny tiles almost as easily as the hundreds contained in historical designs. At such a resolution, tiles and contour lines are not legible as individual polygons, but rather as continuous surfaces with oftentimes non-standard curvatures. In lieue of dozens of horizonal layers, the computer can quickly produce thousands. Thus layers are no longer discernable as steps, and may require no further adornment through modules. Rather the a thousands of layers can appear as continuous concave and convex formations in their own right.

How can these algorithmic muqarnas be brought out of the computer into the real world? For their 2019-2020 Future and the Arts exhibition at Mori Art Museum in Tokyo, the curators commissioned a Muqarna Mutation: an algorithmically designed, robotically fabricated, 6-meter wide muqarna to be installed in a central exhibition room. The project explores how - in the context of the fourth industrial revolution - computation and robotic fabrication can bring the splendor of such a rule-based geometric art into the future.

Muqarna Mutation uses the selective subdivision algorithm described above to produce a geometry that connects a massive pre-existing column at the center of an exhibition room to the room's ceiling. The algorithm generates hundreds of thousands of tiles set among sixteen tiers to create an extragavant ornamental transition from column to ceiling.

A mass-produced industrial product, extruded aluminum profiles, is turned into an elaborate ornamental structure through a radical use of information technology: an algorithm successively defines an intricate form, and robots refine and ennoble simple tube elements into an ephemeral ensemble. The resulting structure transcends the historical typology into something new and unseen.

Standing beneath the muqarna, visitors are struck by a mix of bewilderment and curiosity: a disorientating sensory overload partially obscures the underlying compositional logic. Patterns are readily discernible as one changes perspectives, only to disappear again amidst the endless reflections.

The basis of Muqarna Mutation is a massive, pre-existing 1.6m wide structural column situated at the center of one of Mori Museum's exhibition rooms. Rather than contructing a muqarna in the constrained space between the column and the room's walls, the column itself is used as the origin of the muqarna. Muqarna Mutation creates a transition between this column and the room's ceiling.

A selective subdivision algorithm uses the column's outline and the ceiling's contour to produce a muqarna plan with hundreds of individual tiers, and millions of tiny facets. The algorithm refines these countour lines to create a vast landscape with seemingly endless detail, alternating between stalactives and concave formations. This initial design is depicted in the concept development images.

For fabrication, a mass-produced industrial product - extruded aluminum profiles - is robotically refined and ennobled into a elaborate ensemble. Tiling patterns are articulated as 15,000 individual aluminum tubes.

Reflections and interferences between the shiny tubes create a saturation effect that mirrors the muqarna's historical predecessors. Patterns appear and disappear as one moves beneath it and changes perspectives. 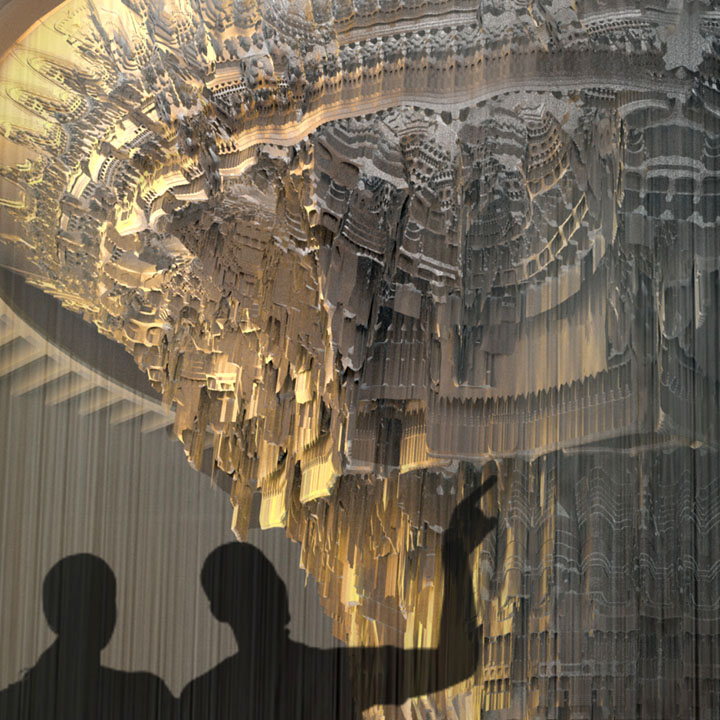 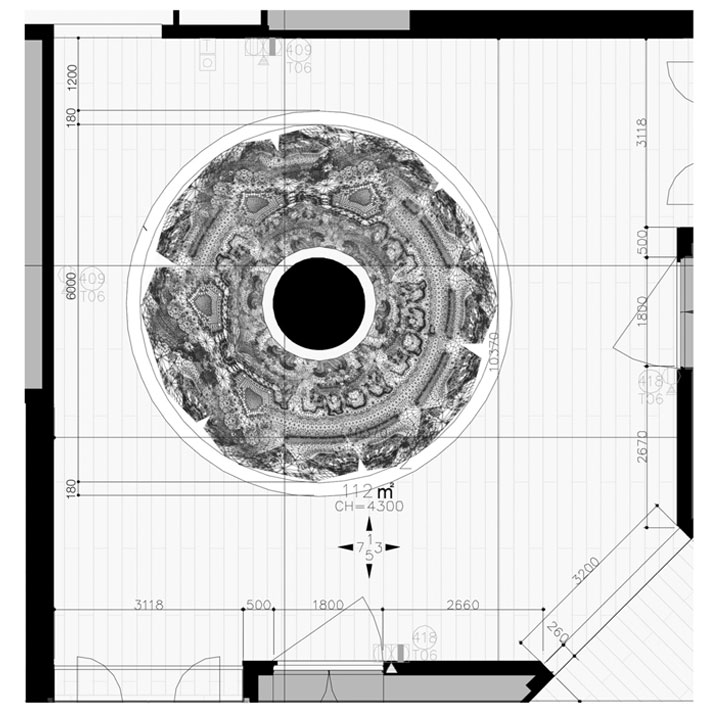 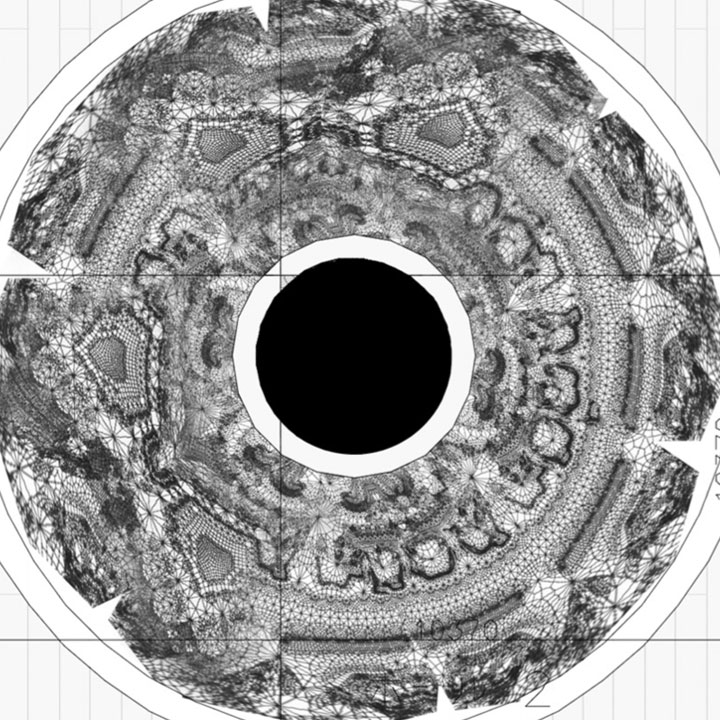 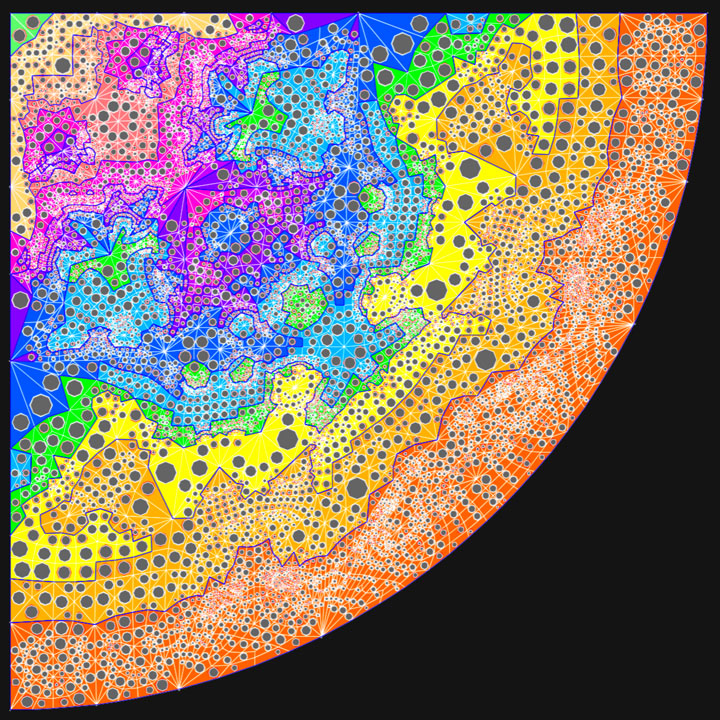 Plan with tiers, tiles and tubes
Previous Next

Fabrication of the Muqarna Mutation's took place at the ROSO Coop laboratory of Feng Chia University, Taiwan, under the expertise of Yu-Ting Sheng and Shih-Yuan Wang.

The muqarna was partitioned into sixteen horizonal tiers, and these in turn were divided into 40 separate components to facilitate transport and assembly. Individual tiers were robotically milled out high-density EPS. In a second step, thousands of holes of different depths and diameters were robotically drilled into the tiers. Separately, a smooth plastic foil was laser-cut and attached to the tiers to improve the surface quality. To articulate the the tiles of the original design, 15,000 individual hollow aluminum tubes were inserted into the tiers and glued into place. Specific tubes were custom fabricated in order to minimize their weight.

The completed muqarna has a surface area of 24m2 and a height of 2.4 meters. 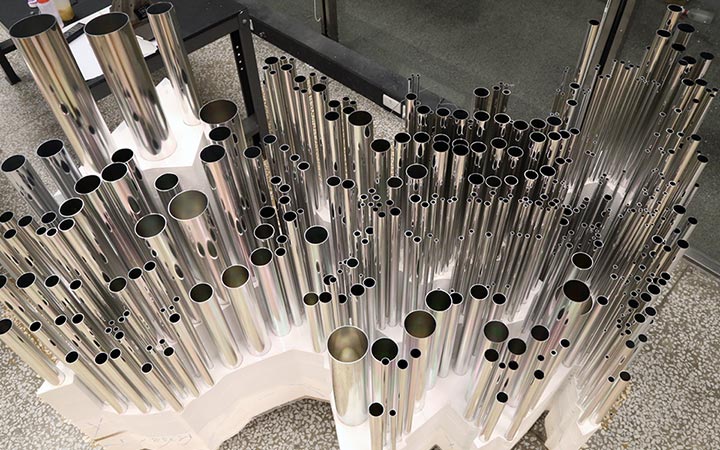 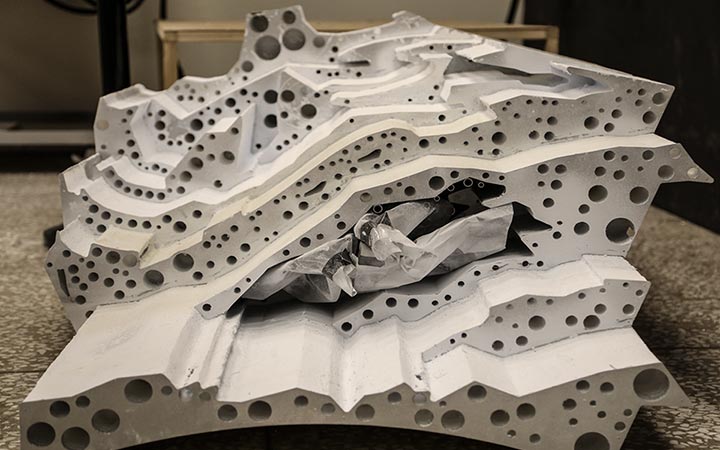 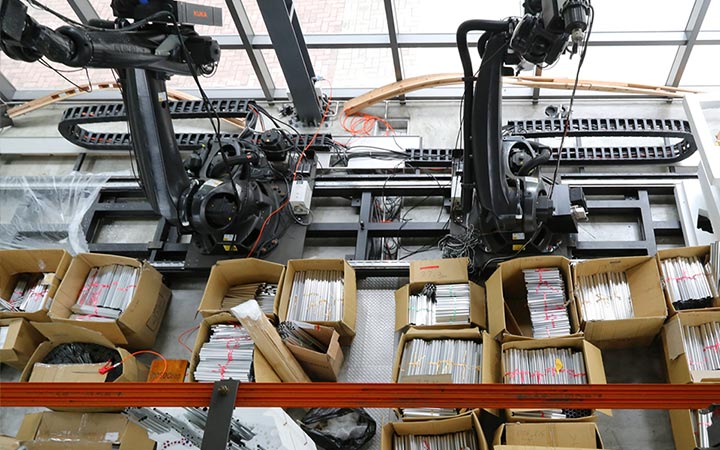 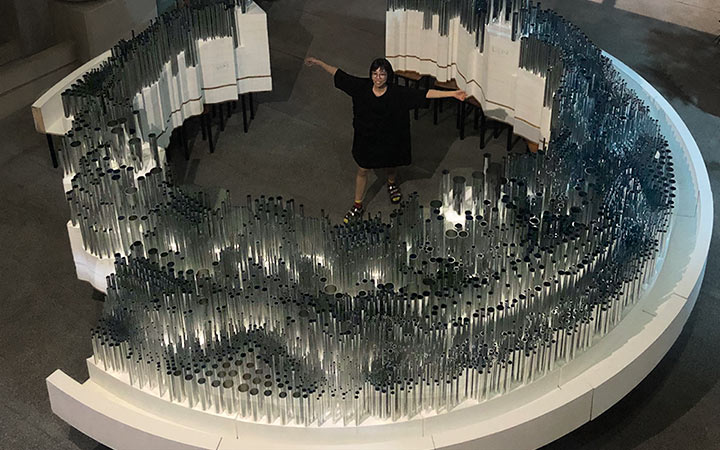 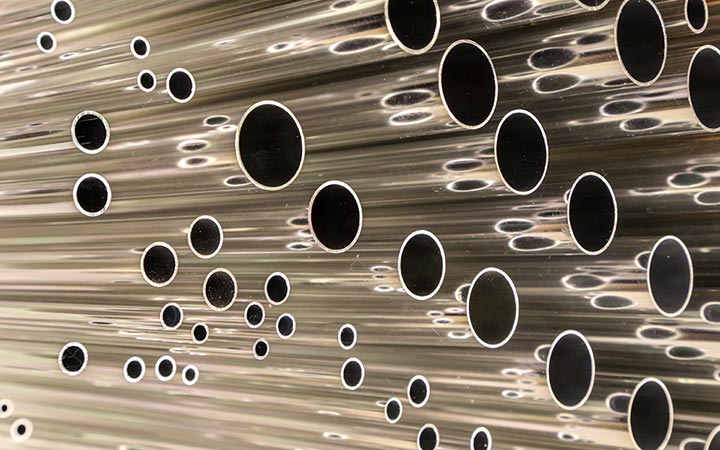 
Muqarna Mutation is a commission by the Mori Art Museum, Tokyo, for its Future and the Arts exhibition [未来と芸術展]. It premiered in November 2019.
Previous Next